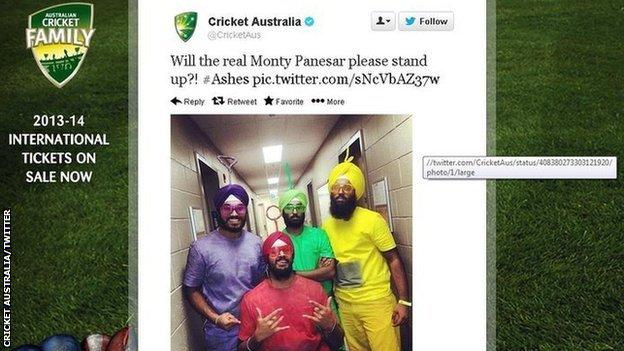 Cricket Australia has apologised for a tweet involving England spinner Monty Panesar that was posted before the opening day of the second Ashes Test.

The tweet included a picture of four men dressed as Teletubbies wearing turbans with the caption: "Will the real Monty Panesar please stand up?"

CA tweeted: "We apologise for any offence caused with our previous tweet. That was certainly not the intention."

Panesar, returning at the Adelaide Oval for his first Ashes match since July 2009, has already found himself in the headlines inadvertently without setting foot on the field.

Last week, ground announcer David Nixon was stood down by CA in the tour match at Alice Springs for "inappropriate conduct".

On that occasion, a suggestion that the announcer had announced England's left-arm spinner in a mock Indian accent resulted in his removal from match-day duties.