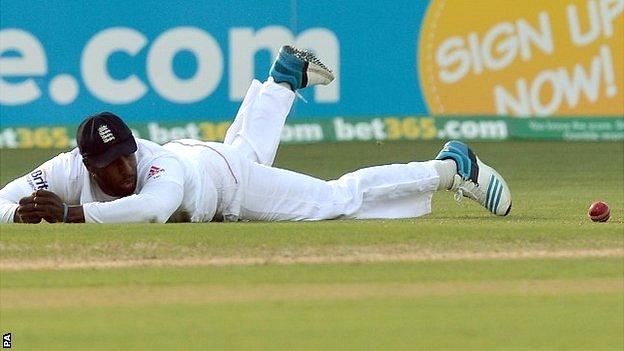 England's Graeme Swann said individuals would not be blamed despite three key dropped catches as Australia closed day one of the second Test on 273-5.

Monty Panesar, Joe Root and Michael Carberry all missed chances in Adelaide but Swann said: "Nobody's going to be hard on anyone else.

"We know how hard we all work on our fielding, and we'll come back tomorrow and hopefully take those half-chances.

Carberry's dropped catch off Panesar to reprieve Brad Haddin on five with two overs of the day remaining appeared particularly straightforward and would have reduced the Australians to 266-6.

"Obviously he's disappointed," Swann said. "Carbs has taken some unbelievable catches on this trip so no-one's having a go at him at all. It's just one of those things. Sometimes they don't stick."

In his first Test since March following off-field problems that led to him leaving Sussex, Panesar dropped George Bailey on 10 off his own bowling, while Root spilled a tough chance at mid-wicket when Michael Clarke was on 18, the captain remaining unbeaten on 48 at stumps.

"Monty's Monty," Swann said. "He's always been left-field and a bit different to everyone else and it's one of the reasons why we love him so much."

Panesar took 1-68, bowling Steve Smith with an impressive turning delivery, and Swann added: "We don't care what's happened in the last 12 months off the field. He's one of the boys and we embrace him as ever and we love seeing him do well."

Swann, who took an outstanding catch at square-leg to dismiss Bailey for 53, quipped at the start of his media conference: "I'll allow a minimum of 15 questions about my catch.

"We're fairly pleased. We missed a couple of chances that on another day we'd expect to take. But we stuck to our guns fairly well.

"We're disappointed, but not angry. That's cricket. You do drop catches. There's always a sense of frustration when they go down but we've taken some great catches on this trip and we're certainly not pointing fingers."

The revamped Adelaide Oval is using a drop-in pitch for the first time in its 128-year Test history and early indications are of a very different surface to the fast, bouncy wicket in Brisbane, where Australia pace bowler Mitchell Johnson took match figures of 9-103 as Australia won by 381 runs.

"There's no pace in the deck whatsoever," Swann added. "There's a little bit of turn. It's drier than we'd normally expect in Adelaide. It was slow and very easy to bat on if they were willing to play straight.

"We've got to try to come back and get the ball talking early on [on Friday]. It got a bit of reverse swing today, which was encouraging.

"If we can do that again and then a bit of spin from me and Monty, and hopefully go through them cheaply.

"You never know what par is until both teams have batted. We thought 500 was par [in the first Test] last week and we only got 120!"

Australia opener Chris Rogers, who made 72, said: "It feels more a day-three wicket than a day-one wicket. There was some surprising turn at times. I think it's not going to be a draw - there's going to be a result.

Rogers, 36, admitted he came into the Test worrying about his form after scoring just 17 runs in two innings in Brisbane.

"A bit of a sleepless night last night," he said. "At my age, probably two bad games is a bit dangerous. So it was important to get some runs on a pretty good wicket today."