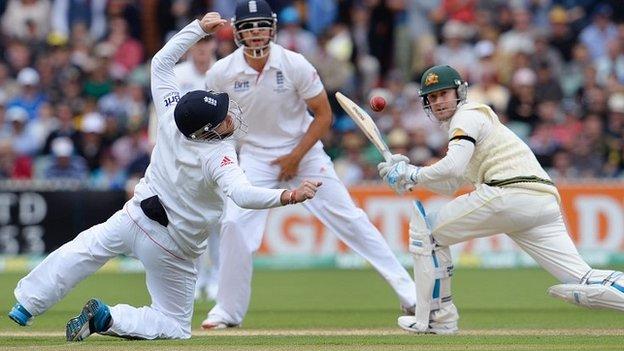 England fought back after an ominous Australian start as a tense, seesaw first day of the second Test ended with the hosts on 273-5.

But despite having lost the toss on a flat pitch, it could have been so much better for Alastair Cook's men after three catches went down in the final session.

"Much of the credit for England's revival should go to captain Alastair Cook, who got his players together for a team talk during the drinks break in the afternoon session.

"At that point, Australia were in total control, but Cook urged his men to keep their spirits up and stay focused and was rewarded with three quick wickets that really shifted the momentum.

"It was a good example of proactive captaincy on an excellent day for the England skipper in which he came up with clever plans for each batsman and regularly shuffled his field placings and bowlers."

With the close in sight, Michael Carberry dropped a sitter off the recalled Monty Panesar to allow Brad Haddin to survive into Friday's second day on seven.

His captain Michael Clarke was unbeaten on 48 having survived a far sharper chance to Joe Root on 18 off Graeme Swann.

A second-wicket partnership of 121 between Chris Rogers (72) and Shane Watson (51) had threatened to tighten Australia's grip on the series.

But three wickets then fell for 19 runs as tea approached, before Clarke and George Bailey (53) first halted England's charge and then began to punish their attack.

England had sprung a surprise by giving Ben Stokes rather than Gary Ballance his Test debut, and selecting a second spinner in Panesar rather than the seam of Tim Bresnan.

As importantly to their hopes of levelling this Ashes series, Clarke won the toss and startled no-one by opting to bat on a drop-in pitch that has seen almost 2,500 runs scored on it in two Sheffield Shield matches in the past two months.

On a morning three times interrupted by rain showers, David Warner was the only wicket to fall, slapping Stuart Broad to Carberry at point for a combative 29 off 32 balls.

Cook was quick to turn to Panesar and Swann, but just as there had been nothing in the track for the pace bowlers, so there was initially minimal turn for the spinners - even if both were parsimonious.

Stokes was accurate in his first spell in Test cricket but let down by the occasional bad delivery, bowling 26 dot balls yet conceding boundaries from the other four.

Rogers's half-century came off 135 balls, never a fluent knock but one that played its part in wearing down the England attack.

With Watson in restrained mood, the pair took the score past 150 with the number three going to his own 50 off 109 balls midway through an extended afternoon session.

Cook was doing his best to conjure a wicket with creative captaincy, at one point putting in two short mid-wickets for Watson and then, with Broad restored to the attack from the Cathedral End, posting three men in the deep on the leg side.

But it was the reflexes of James Anderson that made the breakthrough, snatching an excellent catch off his own bowling to get rid of Watson for 51, and in the next over Swann had Rogers caught behind for 72 to haul the hosts back to 155-3 and change the complexion of the day.

It was the seventh time in seven Tests that Swann has dismissed the left-handed opener, who was caught neither forward nor back to waste the foundations he had so diligently laid.

In the final over before tea, England struck again. This time it was Panesar, getting one to drift in to Steve Smith and turn past the outside edge to hit the top of off stump.

• Shane Watson has now scored four half centuries in five innings at the Adelaide Oval. His other innings was 48

Had Panesar hung on to a sharp caught and bowled chance when Bailey was on 10, England would have seized control.

Bailey celebrated his escape by launching Panesar down the ground for six, and then Clarke had a life of his own when he clipped the returning Swann to mid-wicket where Root could get only fingertips to the ball as he dived to his right.

England were to rue both chances as that fifth-wicket partnership prospered with increasing ease in the evening session.

Bailey, in only his second Test match, went after both spinners while his skipper was content to play a more restrained part.

The partnership had reached 83 and was threatening to take the match away from England when, with shadows from the vast new stands stretching across the outfield, Bailey fell into the trap set for him and pulled a short one from Broad to square leg where Swann took a brilliant catch high to his right.

Haddin survived a tight lbw review against Broad and then, attempting to cut Panesar, got a looping top edge to backward point only for the usually safe Carberry to fumble the most straightforward of chances.

After the disastrous 381-run defeat in the first Test in Brisbane, England will be happy to have stopped the rot.

If they can take the remaining five wickets for less than 100 runs they will believe they have every chance of winning in Adelaide just as they did three years ago.

But Clarke appears in good form after his century at the Gabba, and a score of 400-plus would put his side in a strong position against an England team who have struggled to match such scores over the past 12 months.