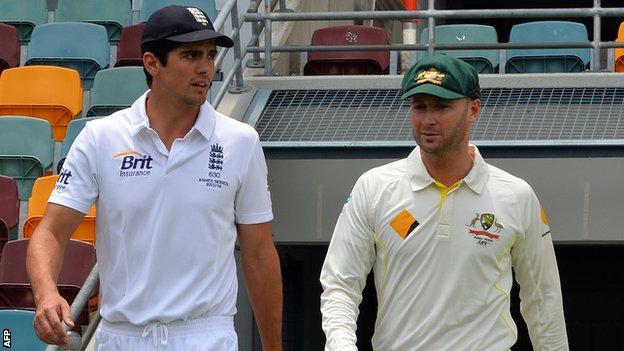 England captain Alastair Cook admitted player behaviour went "over the top" in the first Ashes Test and has urged both sides to improve their conduct.

Clarke was fined 20% of his match fee following a row with Jimmy Anderson.

"It's important we both realise it went a little bit over the top at times in Brisbane and we'll hopefully get it right here in Adelaide," said Cook.

The second Test begins on Thursday, with Australia 1-0 up in the five-Test series.

Cook added that the "majority" of the match in Brisbane was played in "a pretty tough atmosphere", claiming it was "probably only the last little bit where it got a bit ugly".

He added: "We recognise how big the series is for the game of cricket and have to make sure we conduct ourselves in the right way.

"Of course, people want to see competitive cricket, tough cricket and sides not giving an inch. I don't think that will change, but clearly we don't want some incidents that happened last week."

Clarke, who will lead an unchanged side in the second Test, said: "We will continue to play a tough brand of cricket on the field but as we've all said, we all know there is a line we can't cross."

He said the on-field confrontations in Brisbane had not diminished Australia's respect for England, who he expects to come back strongly following their 381-run defeat at the Gabba.

"We will play it tough on the field but the respect, as I said after the first Test match, hasn't changed one bit. We still have the ultimate respect for our opposition," revealed Clarke

"They are a very tough team and I think you'll see the England team come out bigger and stronger after losing in Brisbane and make it a tough challenge for us here in Adelaide."

As he did prior to Brisbane, Clarke predicted what he believed would be the England line-up before it has been officially released.

He claimed Joe Root would move up to number three in the batting order to replace Jonathan Trott, who flew home from the tour last week with a stress-related illness, and said he expected Gary Ballance to make his Test debut at six.

Clarke also expects seamer Tim Bresnan, who has just returned from a long lay-off with a stress fracture of his back, to replace Chris Tremlett.

Given the heavy workload ahead, with back-to-back Tests in Adelaide and Perth, Australia's selection panel have taken the precaution of putting left-arm seamer Doug Bollinger and all-rounder Nathan Coulter-Nile on stand-by to join the squad for the third Test.

They will both be rested from the next round of Sheffield Shield matches and added to the squad for the Waca if required.