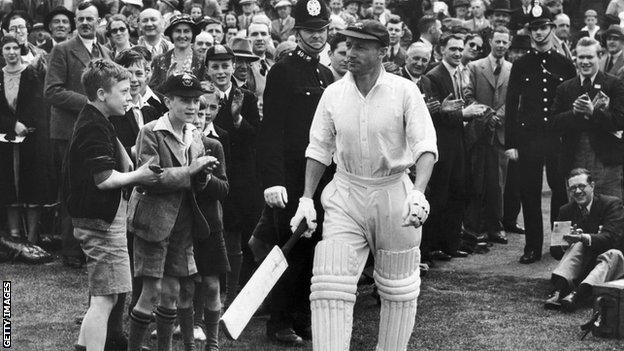 If it seems like a strange way to celebrate the life and achievements of cricket's greatest ever, of Australia's first and most lasting national hero, it's also strangely fitting.

Here, in the city that Bradman made his home for the vast majority of his life, you would expect an uncomplicated celebration of a player without statistical parallel. Instead you find something else - in some places a beatification, in others an indifference.

Where does the real Bradman end, and the myth begin? At the house he lived in for 66 years, tucked away on a leafy street of one-storey Victorian villas in the Kensington Park area north-east of the city centre, there is no indication that the most famous sportsman in this most sports-obsessed nation's history was ever here. No blue plaque, no gawping sightseers, no Don Bradman Cafe selling Bradman Burgers or 99.94 ice-creams.

Back across the River Torrens, tucked into the skirts of the newly upholstered Adelaide Oval, it's a contrasting scene. In the Bradman Collection you can stare at the bat he used to score his first Test century (preposterously thin), watch film of him at the crease (first thought: lots of bottom hand) and recreate his famous childhood game of trying to hit a golf ball against an uneven wall with a stump (strangely easier than you might think).

Whether either takes you closer to discovering the true Bradman is another matter. For something strange seems to have happened to The Don in the 12 years since his death.

"Bradman has been deified, when he was in fact not only a fallible human being but not a very nice one," says Professor Richard Waterhouse, an expert in the history of Australian popular culture.

"Particularly for Australians of Anglo-Celtic descent, he reflects the older Australia in which life was far simpler, and when it was easier to identify heroes. But for a lot of people living in multicultural modern Australia, Don Bradman is actually quite irrelevant.

"As a person he wasn't particularly admirable. He wasn't gregarious; he wasn't generous. He was tight with money, and he was not a great unifier of the national team.

"Bill O'Reilly would subsequently say that the team was divided between Catholics and the rest, and the strictly Protestant Bradman was not very sympathetic towards Catholics. A lot of them in that team didn't like him very much as a human being."

You might bristle at such talk. Even for those of us born thousands of miles away, at a time when the man himself was a reclusive pensioner, Bradman stands on a pedestal looking down on all before and all after.

That final batting average of 99.94 might be the most well-known sporting number of all. There are the 974 runs scored in the Ashes series of 1930 (just the three double-centuries); the battles with Bodyline; the Invincibles of 1948, and that impossible last-day run-chase at Headingley; the second-ball duck in his final innings that silenced a nation and denied him statistical perfection.

That was the cricketer. But if you want the man, you must dig deeper.

There had been celebrated antipodean sporting figures before Bradman, not least Henry Searle - the 'Clarence River Comet', a world champion sculler so popular that his premature death in 1889 sent the colonies into mourning. There would be others simultaneously, not least Phar Lap, a racehorse with the public adoration of Seabiscuit and Red Rum combined.

But Bradman was the perfect storm, the ideal man at the most opportune time.

"Cricket had originally been seen as a civilising game, a way of making the convict colony a civil society," says Professor Waterhouse.

"Gradually it became a way Australia measured itself against Britain - 'Look what we've done in the Antipodes, we haven't become a degenerate race'.

"Bradman's arrival in 1930 coincided not only with the emergence of a national identity and culture that wasn't quite the same as Britain, but with the greatest disaster the country has ever faced, the Great Depression.

"From 1929 to the late 1930s, Australia was a nation in despair, one that didn't even know if it had an economic future.

"Australia always measured itself against Britain. Bradman fitted that, because he was seen as someone who could beat the British at the game they invented."

For all those batting records and Ashes heroics, Bradman's impact on Australian society is almost better illustrated by non-cricketing quirks - the fact that he was the first living Australian to be featured on a stamp; that the postal address for every office of the Australian Broadcasting Corporation in every state capital remains, to this day, PO Box 9994; that, during the Second World War, the phrase 'Bradman will be batting tomorrow' was the Allies' secret code to signal the start of their critical attack on the Monte Cassino monastery.

"The myth takes hold from the beginning," says Professor Waterhouse. "People don't want to hear anything nasty about Bradman, and that would go on for his whole life."

And that, even in his adopted home city, is a problem for anyone who truly wishes to understand the sport's preeminent figure.

"I'm the first to admit that people need heroes and myths," says Brett Hutchins, a professor at Monash University in Melbourne and author of 'Bradman: Challenging the Myth'.

"But when you push them too far they actually become quite unhealthy, because they hide complex realities. What's happened since the 1980s is a beatified version of Bradman who wasn't a man of his time, but somehow stands above everything."

Hutchins points out several less savoury aspects of Bradman's life; not only the sectarian divide in the teams he captained, or the criticism from many team-mates that he was aloof and unpopular, but also his questionable war record and sometimes controversial business dealings.

While team-mate Keith Miller flew Mosquito fighter-bombers on missions to targets in mainland Germany, and fast bowler Ray Lindwall fought the Japanese in New Guinea, Bradman spent the early part of the war as a PE supervisor in Victoria, reputedly at the request of Australia's Governor-General Lord Gowrie, never seeing active service.

Then, in June 1945, the demobilised Bradman created a storm in Adelaide by taking over the office and all business dealings of a fellow accountant within hours of his jailing for fraud and embezzlement.

Then there is the on-field stuff. For all that former Australia captain Bill Woodfull claimed Bradman was "worth three batsmen to Australia", former vice-captain Vic Richardson saw it differently.

"We could have played any team without Bradman," said Richardson, "but we could not have played the blind school without (wrist-spinner) Clarrie Grimmett."

There was even fall-out within Bradman's own family. So difficult did his son John find carrying his father's name that in 1972 he would change his surname, by deed poll, to Bradsen.

"As the years passed with no lessening of his reclusiveness, so his public stature continued to grow," wrote cricket historian David Frith, "until the sense of reverence and unquestioning worship left many of his contemporaries scratching their heads in wondering admiration."

None of this means we should think anything less of Bradman the cricketer. Perhaps it says more about ourselves, about our desire to see our sporting heroes as everything we would like to be rather than in many ways just the same as us, about the mistake of equating physical dexterity with moral superiority.

There will never be another batsman who equals Bradman's achievements on the pitch. Sachin Tendulkar inadvertently illustrated that with his own genius: better by far than any contemporary, he was still not within the same statistical sphere as The Don.

The Don against England

But to ignore his nuances and foibles is to render the greatest cricketer of all time a two-dimensional cut-out rather than a real man.

Admire, by all means. Be astonished. But to blindly worship is to lose the man in the myth.

"Bradman gets discussed because of the numbers, but I'm not clear how much people today really understand about him beyond the playing record," says Professor Hutchins.

"A sense of heroism gets conveyed because of the dominance he delivered for Australian cricket, but the back-story and the complexities, the war record stuff, that's part of the story people don't want to focus on too much.

"There are people who would ask why we would want to focus on those things. I would argue that it presents him as a reasonably interesting and complex character, rather than a halo-wearing image. You can learn more about his life from a more balanced approach."

Back at the Adelaide Oval, the second Test just a day or two away, the South Australian Cricket Association is holding its annual black-tie dinner.

Among the guests admiring the vast new stands and age-old view across to the Moreton Bay fig trees and St Peter's Cathedral beyond is a man in his sixties who once again goes by a familiar name.

John Bradman looks a little like his father - slight, fair-haired, although a good three inches taller than the 5'7" boy from Bowral.

Like his father too he is polite yet restrained, courteous yet private. Delighted with the new layout for the Bradman Collection ("I used to play with a lot of that stuff in the back yard") he is also reluctant to talk about growing up with the most famous dad in the country, as is entirely his right.

There is clearly now great pride about his father's enduring legacy in Australian culture, albeit a characteristic disinclination to discuss it in depth.

"Bradman fused nationalism and sport in a heroic and pure way that has now been lost forever to the trivialities of commercialism and celebrity," wrote the Sydney Morning Herald on his death in 2001.

His son offers a more restrained epitaph. "I think he was as people saw him," he tells this particular cricketing pilgrim from the other side of the globe. "He wasn't pretentious, he didn't like publicity, he was very modest."

One of Bradman's sisters long ago delivered an equally telling assessment.

"I can't understand all this fuss about Don" she is reported to have said, as her brother's unsurpassed career came to that famous end against Eric Hollies' googly. "After all, he was only ever a cricketer."