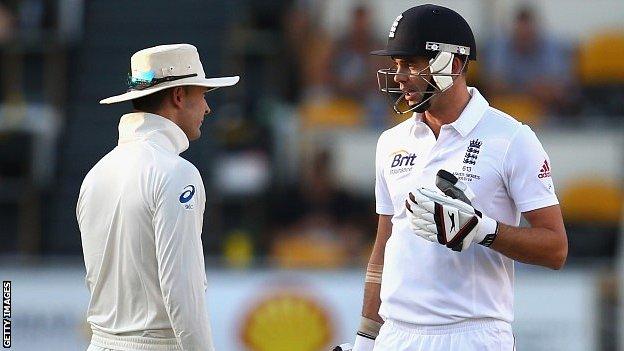 The intense finale to England's defeat in the first Ashes Test at the Gabba, featuring several verbal exchanges between rival players, should not come as a huge surprise to anyone who has played elite sport.

It is known as Test cricket for a reason. It is the ultimate test of your ability, character and mental strength and the atmosphere should always be tough and competitive while still respecting the game, the umpires and the opposition at all times.

Sledging, or "mental disintegration" as former Australia captain Steve Waugh once called it, has been part of international cricket for years but is often misinterpreted by those that play the game at a lower level.

It is not about pointlessly abusing people and using foul language. There is an art to it, and used properly can be an effective way of getting into someone's mind and affecting their performance.

Australia's long-time sledger-in-chief Merv Hughes was a little miffed to be on the receiving end in the 1991 Adelaide Test against Pakistan.

But revenge was sweet for Hughes. A few balls later he finally got his man and as Miandad walked past, he could not resist shouting "Tickets, please!"

England's Jimmy Ormond only played in two Tests, but his witty retort to Mark Waugh at The Oval in 2001 has gone down in Ashes folklore.

Waugh politely asked the bowler: "Mate, what are you doing out here? There's no way you're good enough to play for England."

Ormond, referencing the fact that the visitors were captained by Waugh's twin brother Steve, instantly replied: "Maybe not... but at least I'm the best player in my own family."

During a County Championship game, Glamorgan quick bowler Greg Thomas had beaten Somerset star Viv Richards' bat a couple of times and informed the legendary West Indies ace: "It's red, round and weighs about five ounces, in case you were wondering."

Richards smashed the next ball out of the ground, into a river - and piped up: "Greg, you know what it looks like. Now go and find it."

There are certain topics that are most certainly off limits. Any references to someone's health, their mother, wife, girlfriend or family are totally unacceptable and cross the accepted line of behaviour.

Thankfully, in my career I can count on one hand the number of times I was made aware of personal abuse being used and it was quickly quashed either by team-mates or the umpires.

But if you can gain an advantage over the opposition with a few well-chosen words, while still respecting the laws and spirit of the game, then go for it.

I often use a golfing analogy to describe how a comment at the right time can possibly be an worthwhile tactic, especially if the contest is among fellow cricketers!

If your opponent is standing over a four-foot putt to win the match on the 18th green, could you just remind him that you've seen these missed before? Perhaps you could question whether it is going to break right or left, or wish him good luck with the stroke!

In the international cricketing arena, the individual you pinpoint to play mind games with is often pre-planned in the dressing-room, but the majority of it is on the spur of the moment.

You will pick out players who are either making their debut or going through a bad run of form.

When they come out to bat, the wicketkeeper for example may say something about the batsman to one of the slips or gully, knowing full well that the batsman will hear them.

"Is he really good enough to play at this level?" "He'll be dropped if he fails again here, won't he?" "His technique won't succeed at this level" or something similar.

You want to see if you get a reaction. If they don't take the bait, you soon shut up, and save your ammunition for someone else. But if they rise to it, you will give them a bit more to see if it changes the way they play and prompt them to try something while taking them out of their comfort zone.

The classic example of this approach paying off was in the 2004 Test match at Lord's when Andrew Flintoff urged West Indies tail-ender Tino Best to "mind the windows".

The wind-up had the desired effect as Best charged down the wicket, took a wild swing at the ball and was promptly stumped by Geraint Jones.

On the flip side, some batsmen will walk to the crease intent on starting a verbal battle with the opposition because it actually helps them focus on the job in hand.

Steve Waugh was very much in this camp. He would want to engage in a verbal battle from the start, so our plan for a period of time was not to say a single word to him. Unfortunately, it didn't often work as his extremely impressive record against England will show you!

One way of dealing with sledging as a batsman is to say absolutely nothing, but just to smile or look the other way.

This was the Mike Atherton way. The former England captain was one of the toughest cricketers I played with and someone I would want on my side every day of the week. Regardless of who was bowling, or what was being said, he would stand up to it, stare the bowler down or look away to avoid engaging in the confrontation.

England's Joe Root deployed a similar method in the second innings against Australia fast bowler Mitchell Johnson at the Gabba, smiling back at him and saying nothing at all.

During my career, if I was being sledged, I would sometimes ignore it and sometimes give a bit back.

If a bowler had been giving me a mouthful at the start of my innings, and yet three hours or so later I was 80 not out, I might just point out that they had gone a bit quiet. It was just a case of letting them know that I had won that little battle.

Most importantly though, I would never let words affect how I played. Right from my early days of playing grade cricket in Australia and coming through the ranks at Surrey it was drummed into me to always play the ball and not the man.

Batting is hard enough as it is, so you don't want to make it ever harder for yourself by getting uptight by a bit of taunting from the opposition.

Although I expect the type of verbal exchanges we saw in Brisbane to remain a feature of this Ashes series, they certainly won't be the decisive factor in who takes home the urn.

The real key to the rest of this contest is whether Johnson can back up his match-winning performance at the Gabba in Adelaide and beyond.

If he does, it could be very difficult for Alastair Cook's men to fight back. If he doesn't, England will be right back in the series.