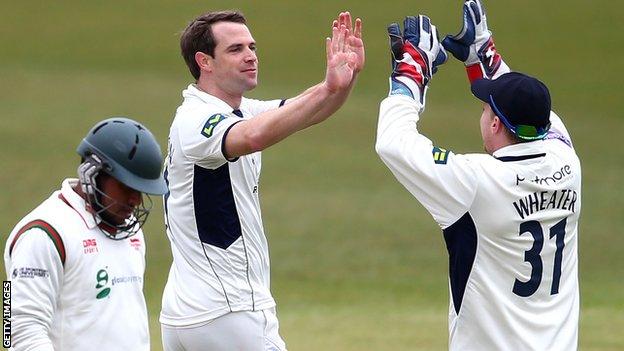 Hampshire seam bowler James Tomlinson has signed a one-year contract extension which will keep him at club until the end of the 2015 season.

The left-armer's contract was due to expire at the end of next season.

The 31-year-old made an immediate impact after making his debut in 2002, taking 22 wickets in his first season.

"James is Hampshire through and through and shows a genuine passion for the club and his team-mates," said Hampshire chief Giles White.

This year, the seamer finished the season in the top five bowlers in Division Two of the County Championship with 53 wickets at an average of 24.16.

"We are delighted to have him around for at least the next couple of years," added White.

"He consistently puts in performances in the longer form of the game and he will have a big part to play in our bid for promotion in 2014."

Tomlinson said he was delighted to have signed the new deal and now hopes to fire Hampshire to promotion next season.

"I'm over the moon and very happy to carry on," he told BBC Radio Solent. "I really enjoyed last season and I'm looking forward to the next year.

"I've felt last season was the best I've bowled for Hampshire. I felt really consistent and was really pleased with myself. If we can get four of us doing that then I'm confident we can go up."