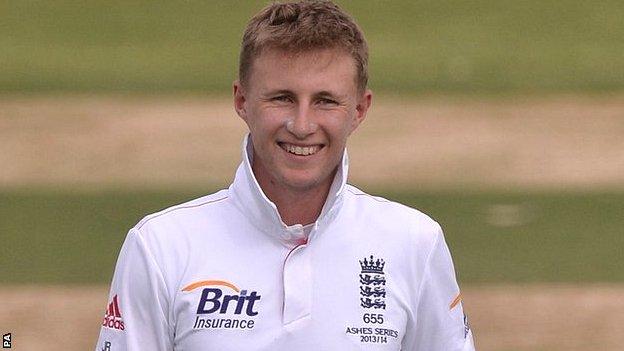 Bresnan has been officially added to the touring Ashes squad and may well start ahead of Chris Tremlett as England look to fight back from the 381-run defeat in Brisbane.

Root's move up the order is expected to leave room for Gary Ballance to make his Test debut, although Ben Stokes and Jonny Bairstow are also in the frame.

"I would move Ian Bell up to number three so there is as much solidity as possible at the top of the order. I always believe you should play your best batsmen in the top four and Bell is very much one of them. Bell has done well at number five but you have to do what is best for the team. Joe Root could stay at five or six and continue his impressive start to his international career."

England have to make changes to their batting line-up after Trott left the Ashes because of a long-standing stress-related condition, and Root appears to be favourite ahead of Ian Bell to bat at three.

Gooch told BBC Sport: "Root is an opener. We didn't obviously foresee this situation with Trott, but players have to adapt.

"Whoever comes into the team, whether it is Ballance, Stokes or Bairstow, I would have thought they would come in down the order. You have got to go out there and stick your chest out for England."

Ballance top-scored with 55 as England drew their tour match against a Chairman's XI in Alice Springs over the weekend, with all-rounder Stokes making 28.

Zimbabwe-born Ballance was believed to be pencilled in to play at six in the first Test, but his poor form in the warm-up games and the contrasting heavy scoring of Michael Carberry brought a rethink.

We want Jonathan Trott back playing cricket - the whole world does

The selection of Stokes would allow England to pick another bowler, possibly spinner Monty Panesar, on a pitch at the Adelaide Oval that has proved slightly more helpful to spinners than pace bowlers this season.

Gooch said: "Ballance got stuck in well in Alice Springs. I like his temperament and the way he plays.

"Stokes has impressed as well with his attitude and the way he's gone about his cricket. I think we all think he's noticeably improved in the last month."

Australia, meanwhile, are likely to go into the Test with an unchanged side from the one that hammered England at the Gabba.

There had been the slim possibility that coach Darren Lehmann might rest the injury-prone Ryan Harris on a pitch that has been a batsman's paradise in the past month, but Harris insists he will play on.

He said: "I'll be all guns blazing here as well. I'm not going to miss a Test unless I really have to.

"I said that from the start I want to play five matches. All the reports about me resting - I hadn't even had a conversation with Boof [Lehmann], and he hasn't mentioned one word about me resting which is good. I'm ready to go here."

Harris backed his coach's assertion that there would be no mention of Trott during play after the batsman flew home from the tour.

"I'd be disappointed if anyone brings that up," said Harris. "It's not a nice thing that he's going through.

"We want Jonathan Trott back playing cricket, the whole world does. He's obviously made a big decision to go back and I'd love to see him playing soon.

"I had some great battles with him over in England and I was looking forward to doing that again here. Hopefully he gets back playing soon because the England team need him but world cricket needs him. He's a world class player."

But Harris admitted there would be no other quarter given despite the fact that match referee Jeff Crowe will speak to both captains before the Test to ask that they tone down the sledging that dominated the first Test.

Michael Clarke was fined 20% of his match fee at the Gabba after the stump microphone picked him up telling James Anderson to "get ready for a broken arm".

Harris told BBC Sport: "We'll keep that pressure and aggression up. A lot has been said about the sledging, but it's stuff that's been going on for a long time.

"It's the same for both ways. We give it to them and they give it to us. It's Ashes cricket. Everyone wants to win."