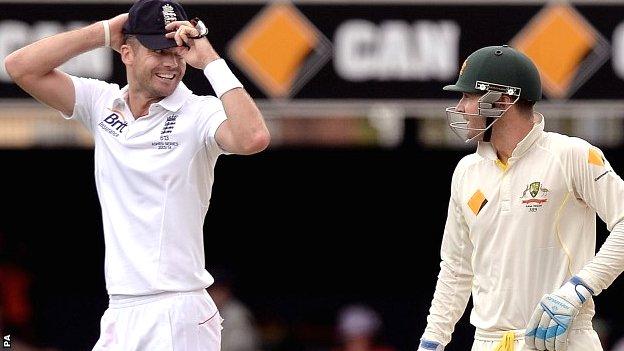 James Anderson says sledging is a skill and a key factor in him becoming one of England's leading bowlers.

In the current Ashes series, Jonathan Trott left the tour with a stress-related illness and Michael Clarke was fined for insulting Anderson.

But Anderson, who has 331 Test wickets, wrote in his Mail on Sunday column: "It heightens my concentration.

"Certainly in the past few years I've developed it as a skill and it has helped me take the wickets I have."

Australia captain Clarke was penalised 20% of his match fee after telling Anderson to prepare for a broken arm from left-arm paceman Mitchell Johnson, who destroyed England with match figures of 9-103 in an emphatic 381-run victory for the home team in the first Test at Brisbane.

Anderson is second only to Ian Botham's 383 in the list of England wicket-takers. And he wrote: "The atmosphere during the last hour in Brisbane was as hostile as I have experienced.

"I have absolutely no problem about any of what the Australians were doing on the field, I probably dish it out more than most in the field, so I generally get it back more than most. I expect it and accept it."

England have won the last three Ashes series but travel to Adelaide having to find a new number three following the unexpected departure of Trott, who scored two centuries and averaged 89 on the previous tour of Australia in 2010-11.

"Sometimes, certainly after the game with what happened with Jonathan Trott, you sit down and think, is it actually that important?" Anderson admitted.

"But when you're out there and batting, all you are concentrating on is trying to win the game and, in this case, one of the most important series in our careers."

Johnson claimed the aggressive attitude shown by Australia at Brisbane would not change but coach Darren Lehmann has already confirmed that his team will not use Trott's illness as a sledging topic during the Adelaide Test.

"That certainly won't be talked about in this Test match," Lehmann assured reporters. "We wish him all the best in his recovery."