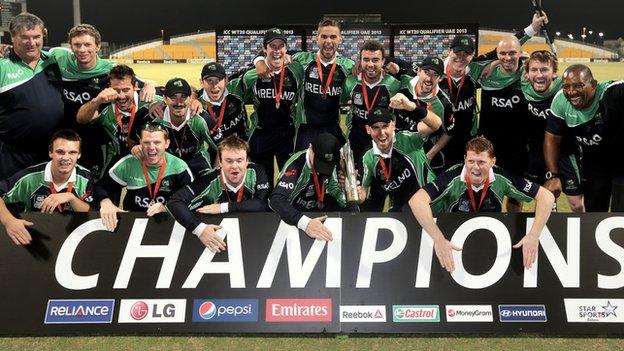 After winning the toss and batting first, Ireland ran up a formidable 225-7 from their 20 overs at the Sheikh Zayed Stadium in Abu Dhabi.

That proved too much for Afghanistan to chase down.

Despite making a flying start to their reply, they were bowled out for 157 to suffer a 68-run defeat.

Both teams, who were meeting in the final for the third successive time with one win apiece previously, had already secured their place in the first round of next year's ICC World Twenty20 finals in Bangladesh.

But there was no sign of Ireland easing off as they ran amok with the bat.

Opener Paul Stirling was man of the match in last year's final, after scoring a 38-ball 79, and he was in similarly destructive mood, top-scoring with 76 from 43 balls, including four sixes and eight fours.

The Middlesex player shared in a 68-run stand for the first wicket with captain William Porterfield (27 off 14) to set the tone for the innings.

Trent Johnston, promoted to number four in the order, smashed 62 off 32 balls with four sixes and five fours to help power Ireland to 225.

That left Afghanistan needing to produce something special to reclaim the title, although they looked capable of doing it as they matched their opponents' blistering start.

They clubbed 14 runs off the first three balls of the innings, bowled by Max Sorensen, and were 36 without loss after three overs.

Ireland spinner George Dockrell stemmed the onslaught with wickets in both of his opening two overs, including that of the dangerous-looking Mohammad Shahzad for 38 off only 18 balls.

At the end of their six powerplay overs, Afghanistan were still in a good position on 76 for two.

They could not keep that run-rate up once the field spread though, and lost two more wickets in the seventh over, bowled by Alex Cusack, before being bowled out in the penultimate over.

Man of the match Johnston took three for 34 to cap a memorable all-round display from the retiring 39-year-old, while Cusack, Dockrell and Tim Murtagh each finished with two wickets apiece for the victors.