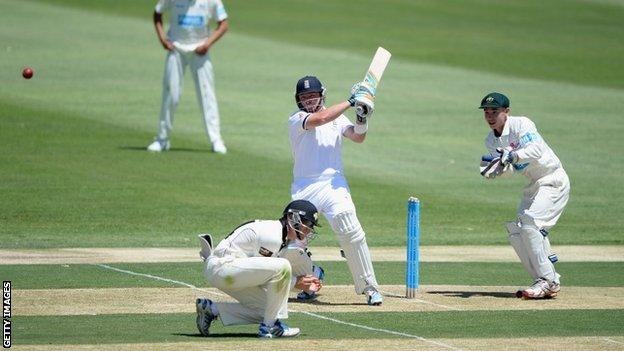 Ian Bell is willing to step in for his friend Jonathan Trott and bat at three for England in the second Ashes Test.

Joe Root and Gary Ballance are other options for the key position in the Adelaide match, starting on 5 December.

But Bell, who captained as England's final warm-up match tapered off into a draw, says he has already discussed it with the team's management.

Where should Bell bat?

Bell, who was England's player of the series in last summer's Ashes when batting at five, added: "That decision is out of my control. We've obviously got a lot of options with the balance of the side. But I've put my hand up to go up the order, so we'll soon see."

Bell admitted that the Trott after the 381-run first Test defeat in Brisbane with a stress-related illness had caught him by surprise.

"You could sense that he was a little bit more quiet, things like that," Bell said.

"I wasn't too aware of what was going on in the dressing-room at the time. As a friend I wish him a speedy recovery.

"It's a really sad thing to see him go, because he's been such a key player for us. We all have areas we're monitoring all the time, and you don't always open up to everyone.

"We do have people like (team psychologist) Mark Bawden, who are there to speak to all the time. I wish him all the best now and hope he can get back to normal as quickly as possible."

Australia coach Darren Lehmann announced earlier on Saturday that his players would desist from mentioning Trott on the field when the second Test begins on 5 December.

While Bell welcomed that news, he downplayed the talk of a serious rift between the two sides.

"I don't think that worries us too much. I think a lot of this talk about sledging has gone over the top - I don't see it as being any different to what it was like in the summer at home, or in series I've played in the past.

"The guys are really excited about the Adelaide Test. We are playing Ashes cricket and it's the most exciting form of the game as an Englishmen or an Australian. Both teams are desperate to win."

England ended the second and final day of their match against a Cricket Australia Chairman's XI on 47-1, having struggled in the field as their inexperienced opposition made 254-8.

Bell, stand-in captain as Alastair Cook was rested, said: "I thought Swanny did really well and held his nerve - four-for is a great effort and Monty supported him really well.

"It didn't go quite as the pace bowlers would have liked, but, on this kind of wicket, the more pace that was on it, the easier it was to bat against."