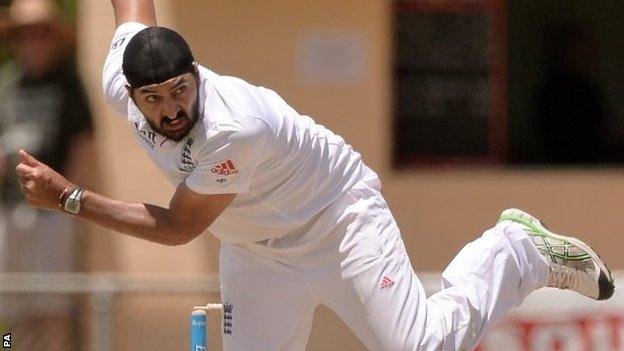 The ground announcer for England's in Alice Springs was stood down by Cricket Australia for racially mocking Monty Panesar during day two of the game.

David Nixon introduced the England spinner in an Indian accent when he came on to bowl.

Left-armer Panesar was born in Luton and is of Indian descent.

"Cricket Australia deemed the conduct of the PA announcer as inappropriate," a CA spokesman said.

Nixon, a producer for the Australian Broadcasting Corporation (ABC), had been using a sarcastic tone throughout the match against the CA Chairman's XI and was cautioned during Friday's play for teasing England batsman Joe Root.

"You can go and have another drink now, Joe," Nixon commented when Root was dismissed.

The England batsman, who was punched by Australia's David Warner in a Birmingham bar before the summer Ashes, repeatedly called for drinks during his first innings in temperatures of up to 39C.

In the post-match news conference, England's stand-in captain Ian Bell said he was unaware of the incident, while Panesar did not hear the remarks.

Panesar has taken 164 wickets in 48 Tests, the last of which came in Auckland in March.

The Essex spinner took 3-41 on Saturday to push his case for selection in the second Test in Adelaide, starting on 5 December.