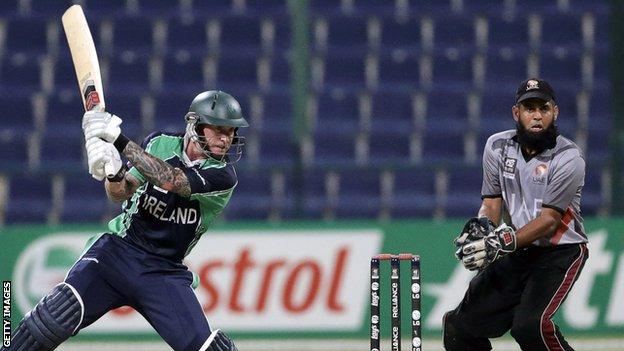 Ireland will face Afghanistan in Saturday's final at the World Twenty20 Qualifier after earning a 62-run win over hosts the United Arab Emirates.

The Irish, already qualified for next year's tournament in Bangladesh after an unbeaten run in their group, were in some trouble at 42-4 in their innings.

However, Trent Johnston's 35 and John Mooney's 29 helped the Irish post a defendable total of 147-8.

On a slow pitch and under lights, the Irish early order struggled with captain William Porterfield departing for only seven and Paul Stirling dropped before being bowled by Manjula Guruge for 17.

James Shannon (7) and Gary Wilson (3) both failed to reach double figures as Ireland slipped to 42-4.

It could have been even worse for the Irish at that stage had they not been gifted more than a dozen runs by some dismal UAE fielding.

The arrival of Kevin O'Brien steadied the Irish innings as he went on to score 31.

But the crucial partnership was delivered by veteran Johnston and Mooney as they put on 55 for the sixth wicket to move Ireland to 138-6.

Former Ireland skipper Johnston will retire from international cricket after next month's Intercontinental Cup decider against the Afghans in Dubai.

The UAE briefly threatened to chase down Ireland's total as some lusty early hitting from Shaiman Anwar put them on 17-0 after two overs.

However, Sorensen (4-15) dismissed both openers Anwar and Muhammad Azam along with UAE captain Khurram Khan for a duck to leave the hosts struggling on 26-3.

Tim Murtagh was on a hat-trick after dismissing Muhammad Shafiq and Asim Khurshid and the Middlesex seamer finished with figures of 4-24 with O'Brien and Stirling also taking wickets.

Ireland skipper Porterfield was pleased with the performance of his middle order batsman who have not been required much thus far in the tournament.

"It's great to see them coming to the party when required," added Porterfield.

"Once we got up around 150, we were pretty confident with the bowling attack we have and I think we bowled the best we have all tournament."

Earlier, Afghanistan qualified for their third consecutive World Twenty20 qualifiers final after a comprehensive seven-wicket win over Nepal at the Zayed Cricket Stadium.

An all-round performance by man of the match Samiullah Shenwari saw Afghanistan chase down 90-8 total inside 15 overs as he took three wickets and hit an unbeaten 24.