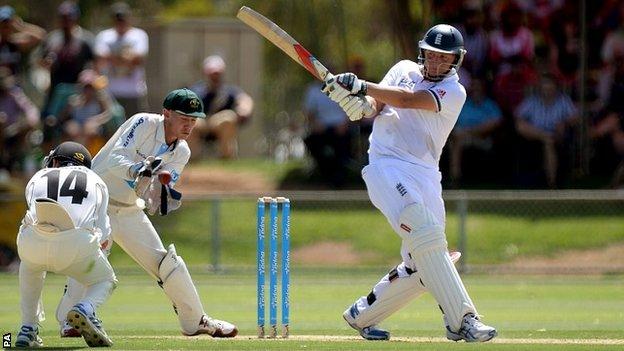 Gary Ballance made his case for the vacant spot in England's Test top order as the tourists laboured on the first day of their match against the Cricket Australia Chairman's XI in Alice Springs.

On a brutally hot day in the guts of the Outback, Ballance top-scored with 55 as England declared on 212-7 on a slow pitch with an even slower outfield.

But Matt Prior's struggles with the bat continued as he made just 19 against an unheralded attack featuring mainly players on the fringes of State cricket.

"Gary Ballance made an excellent, assured, resourceful fifty. He was composed and controlled, wasn't drawn into any unusual shots or trying to take a bowler on. If England are looking for a Jonathan Trott replacement, ultimately, he could have a case.

"Matt Prior just seems to be attracting good balls at the moment and finding ways of getting out."

The home side reached 16-0 at the close, leaving pace bowlers Steve Finn and Boyd Rankin only Saturday's second and final day to convince the selectors that they deserve a call-up for the second Ashes Test, starting in Adelaide on 5 December.

If the muted atmosphere in Alice Springs was a respite from the noise and hostility encountered during the 381-run defeat in the first Test at the Gabba, the standard of the cricket will do little to prepare England for facing the pace and aggression of Mitchell Johnson and Ryan Harris next week.

But of the three players competing for the position vacated by Jonathan Trott - who has flown back to the UK because of a long-standing stress-related condition - Ballance found some form at an opportune moment.

The 24-year-old, who had scored just four runs in his two previous innings on tour and faced only 18 balls, said: "After a few low scores, you take a bit of time to get used to the situation. But once I'd batted for a few overs I felt comfortable, and it was just like any other innings.

"It would have been nice to push on and get a hundred, but I've given myself a bit of confidence, so if I get the chance then I'll be ready.

"It would be a great feeling [to play in Adelaide] but I don't want to look too far ahead.

"If selected, I think I'll be ready. The boys are working really hard, and we're going to be ready for Adelaide."

Ballance hit five fours in his 134-ball innings to steady the under-fire tourists after they had lost Michael Carberry for six when he clipped left-arm pace bowler Josh Lalor to midwicket.

Joe Root had been moved up to open, perhaps in preparation for batting at three in the second Test, only to be caught in the gully for 22 in the 15th over.

Prior has reached double figures only five times in his past 15 innings and will take little succour from his brief knock on Friday morning against a side featuring only one man, captain Michael Beer, with even the briefest of international experience.

Relieved of both wicketkeeping and his expected captaincy role so he could focus on his batting, he had already survived one chance when he was caught behind by 16-year-old wicketkeeper Jake Doran off the bowling of right-arm seamer and former sushi delivery-man Simon Macklin.

Ballance's controlled innings helped England recover from 72-3 at lunch in partnership with one of his rivals for the Test side, Ben Stokes.

Stokes was the more aggressive of the two and was furious when a fine catch from Marcus Harris ended his 54-ball innings on 28.

A mix-up with stand-in skipper Ian Bell then cost Ballance his wicket as he was run out by James Muirhead before Bell followed for 13.

On a picturesque ground backed by the red hills of the McDonnell Range, surrounded by sun-bleached gum trees and frequently dive-bombed by galahs, Jonny Bairstow (31 not out) and Graeme Swann (29) then picked up the pace as the temperatures of 37C took their toll on the bowlers.

Neither Rankin nor Finn was able to take a wicket in the 10 overs the Chairman's XI faced.

They will have another chance to put Chris Tremlett under pressure for the third seamer's place in England's Test side on Saturday, but Ballance may already have done enough to secure his Test debut next week.

Meanwhile, Tim Bresnan further enhanced his claims for a place in the team in Adelaide with some impressive death bowling as the England Performance Programme hung on for a draw against Queensland Second XI in Brisbane.

The hosts looked on course to pull off a remarkable victory as they chased a target of 422.

But, although he did not take any wickets, Bresnan produced a tight spell at the end to ensure Queensland fell eight runs short, having needed 18 from six overs at one stage.