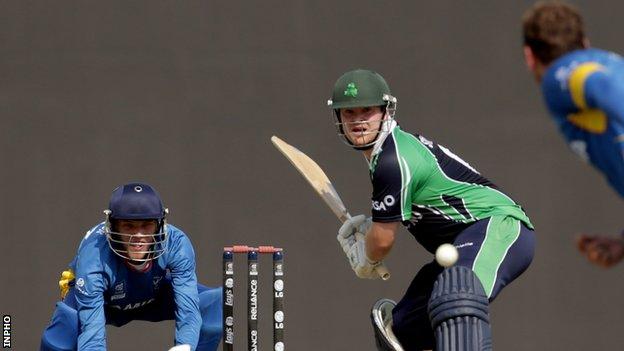 Opener Paul Stirling says Ireland will still be motivated to win their World Twenty20 qualifier semi-final on Friday, despite having already booked their place in Bangladesh next spring.

The Irish face hosts the United Arab Emirates in Abu Dhabi on Friday.

"We had a tough game against them in the group before getting over the line," said Irish opener Stirling.

"TJ [Trent Johnston] bowled a superb final over in the game."

Stirling said Ireland had produced a "real team effort" in the United Arab Emirates, but there is little doubt his opening partnership with captain William Porterfield has been a key aspect of their success.

We're used to handling pressure having played in World Cups

White Stirling has been in typically hard-hitting form, fellow Ulsterman Porterfield notched the first ever Ireland T20 century when he blasted an unbeaten 127 in the win over the USA.

"Porty's been playing some fantastic cricket out here, and I've never seen him strike the ball so hard and so cleanly," added Stirling.

"We've been dovetailing perfectly and it doesn't matter to me who takes the initiative as long as we're building stands which put the team in a winning position."

Stirling played the lead role on Sunday as he top-scored with 77 in the 85-run win over Hong Kong which secured Ireland's place at the finals in Bangladesh.

And his off-spin brought him figures of 4-10 - the second best by an Irish player in T20 cricket.

"That display gave me personally, and the team, a lot of confidence. I was helped out by some fantastic catches, with James Shannon and Porty's efforts being right out of the top drawer," added Stirling.

"It's been a real team effort so far with all the guys contributing. Willo [Gary Wilson] has been incredibly consistent, and Kevin O'Brien was superb in that Hong Kong win.

"There's a lot of experience in the ranks and that has served us well so far. We're used to handling pressure having played in World Cups, and that has been a crucial difference."

If Ireland beat the UAE they will play either Afghanistan or Nepal, with the final on Saturday at 14:00 GMT.