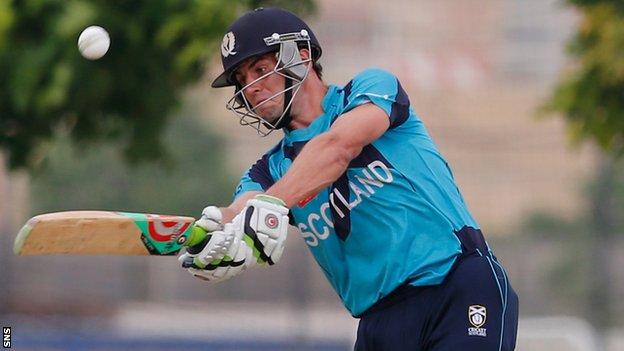 Scotland have failed to qualify for next year's World Twenty20 following an eight-wicket defeat by the Netherlands.

Batting first, the Scots lost both openers for ducks before setting their opponents 147 to win their play-off in Abu Dhabi.

The Dutch, inspired by Wesley Barresi (75 not out), reached their total with 13 balls to spare.

Scotland recovered from a dreadful start in which they were 1-2 in the second over, with tournament top-scorer Matt Machan (61) and Michael Leask (58) putting on a 111-run partnership.

But the momentum was lost when Leask fell in the 16th over, with Machan losing his wicket in the 18th.

There were no late fireworks as Rob Taylor managed seven runs from eight balls and skipper Kyle Coetzer could only reach the same total from six deliveries.

Neil Carter struck in the first over of the Dutch innings to give Scotland hope of defending their total.

However, the Scottish attack was to yield just one more wicket as Ben Cooper (40) and Michael Swart (30 not out) gave valuable support to the impressive Barresi.

"Their batsmen played well and put us under pressure - there was nowhere for our bowlers to go.

"I feel our guys have put in some great performances and feel that we don't deserve to be in this position at the moment. We do feel a little hard done by, but people know the situation."

The Netherlands and Hong Kong will join Afghanistan, Ireland, Nepal and United Arab Emirates in Bangladesh in March.

Scotland, who have not been to a major tournament since 2009, will play Papua New Guinea in the seventh-place play-off match on Friday.