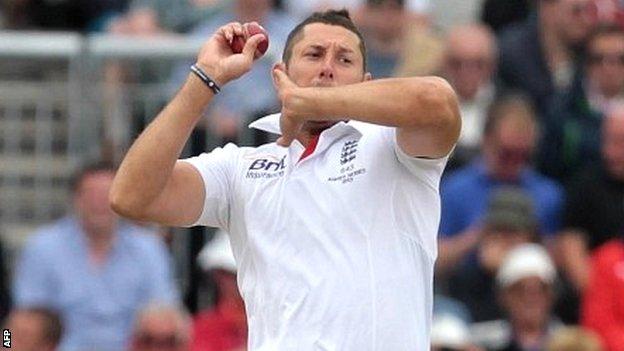 Tim Bresnan pushed his claim for a spot in the England team for the second Ashes Test against Australia with a strong showing in Brisbane.

The 28-year-old, who is recovering from a stress fracture in his lower back, took 4-31 for England's Performance Programme against Queensland Second XI.

"To have someone like him available would be a big bonus for England."

The second Ashes Test begins in Adelaide on 5 December.

England trail 1-0 in the five-match series following a 381-run defeat in the first Test at the Gabba.

Bresnan stayed in Brisbane with the young guns to get overs under his belt as England's senior players prepare for their two-day match against a similarly low-key opposition here in Alice Springs.

Bresnan took 4-31 as he looks to convince the selectors he is fully over the stress fracture of the back that has ruled him out of selection since the fourth Ashes Test in Durham last August.

Both Steven Finn and Boyd Rankin will play in Alice as they battle for the third seamer's place with Bresnan and first Test incumbent Chris Tremlett.

Ben Stokes, Jonny Bairstow and Gary Ballance have also been named in England's team to take on a Chairman's XI on Friday and Saturday as England audition for the place vacated by Jonathan Trott when he returned to the UK earlier in the week with a stress-related illness.

Alastair Cook, James Anderson, Stuart Broad and Kevin Pietersen will all be rested for England's first ever senior fixture at Traeger Park, with Matt Prior expected to open with Michael Carberry.

Prior is looking to find some form with the bat having averaged only 15 since the start of the Ashes in England last summer.

And although rain disrupted the team's final practice on Thursday - having rained just three times in five years in Alice Springs, it has now rained twice in three days - Prior and his team-mates have enjoyed some respite from the hostility and contempt that has been thrown at them in Australia since their 381-run thrashing in the first Test.

Some of the team spent a night at Uluru (Ayers Rock) sightseeing as they look to recover from the physical and verbal pasting they received from Mitchell Johnson and his team-mates.

Chairman's XI captain Michael Beer, whose dismissal was the final wicket when won England their first Ashes win down under in 24 years in 2011, said his team would also try to unsettle England with some verbal blows.

"Obviously if you're playing against a cricket side and there's any way you think to make them uncomfortable, you'll do it," said spinner Beer.

Stokes, 22, was sent home from the England Lions tour of Australia at the start of this year for two breaches of team discipline.

But although his first-class average is below that of Ballance and Bairstow, his all-round abilities - he took five wickets with his swing bowling in the one-day series against Australia that followed the Ashes - may push him ahead in the queue.

Stokes said: "What happened [with the Lions] wasn't great. But I set out to turn it around and convince Andy Flower that this guy meant it right, and I think it's been a reward getting on this trip.

"There's going to be a space up for grabs, and there's three guys trying to take the chance for that spot. One of us can put their hand up and get in the Test team for Adelaide.

"Being an all-rounder does help me. If I thought to myself that I wasn't ready for it then I'd be taking a long hard look at myself."

Both Bresnan and Stokes could play in Adelaide, with Tremlett down on pace at the Gabba and the pitch in Adelaide expected to favour batsmen.

Left-arm spinner Monty Panesar too could come into the equation, with former Australia skipper Allan Border suggesting that the drop-in track may turn significantly later in the game.

Before his wickets the England XI had declared on their overnight 376-9, Middlesex's Sam Robson having retired on 102 and Moeen Ali of Worcestershire adding 83.

They then dismissed the home side for 156, with Bresnan the pick of the bowlers, and left-arm spinner Danny Briggs taking 3-17.

In their second innings the tourists closed on 156-5, a lead of 376, with one day of the match remaining.