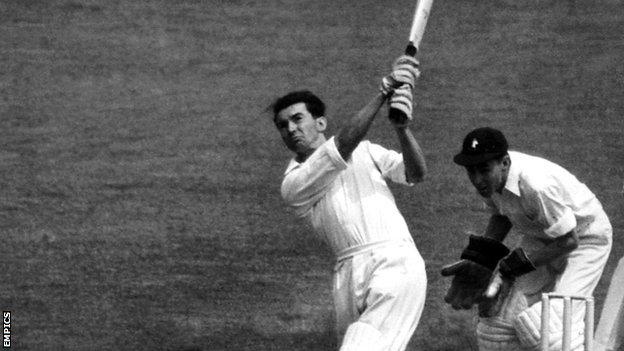 Former England opening batsman Reg Simpson has died at the age of 93.

He led England to their first post-War victory in Australia with an unbeaten 156 in the fifth Ashes Test in 1951.

It was the finest knock of the Nottinghamshire-born cricketer's 27-Test career.

Simpson and the RAF

Reg Simpson's Nottinghamshire debut came in 1940 against the RAF, who he would go on to serve with during the Second World War.

Simpson, who played 495 first-class matches for Nottinghamshire and scored 30,546 runs, including 64 centuries, between 1940 and 1960, was the oldest surviving England Test player.

The right-handed batsman also served as a Royal Air Force pilot in the Second World War.

"Reg Simpson was an elegant opening batsman who served his country with distinction both as a pilot in the Second World War and as a fearless player of fast bowling," Collier said.

"He held a deep passion for the game and for his beloved Trent Bridge. On behalf of everyone at ECB we extend our deepest sympathy to Reg's family."

After retiring as a player Simpson joined Nottinghamshire's committee in 1961, staying there for 37 years.