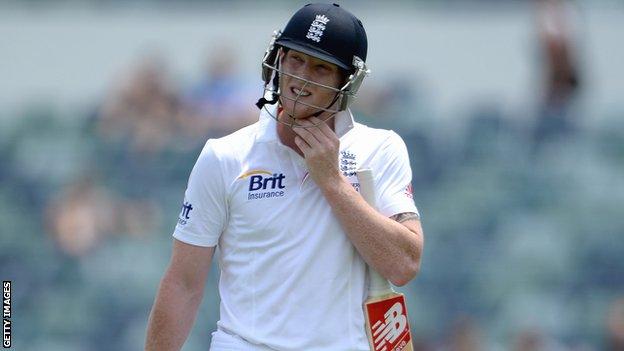 Ben Stokes has been backed to replace Jonathan Trott in the England side for the second Ashes Test by former players Michael Vaughan and Steve Harmison.

"They need an X-factor bowler and that allows them to play Monty Panesar or Steve Finn," he told BBC Radio 5 live.

"This is not just me with a Durham hat on, it's me being practical," added 35-year-old Harmison, who took 222 wickets in 63 Tests for England.

"England are behind in the series, they need a wicket-taking bowler."

Trott, 32, endured a difficult time in the first Test against Australia in Brisbane, struggling against the bowling of Mitchell Johnson and scoring only 19 runs in two innings as England went down to a 381-run defeat.

Another potential Test debutant, Gary Ballance could come in, as could Yorkshire team-mate Jonny Bairstow, who has made 12 Test appearances.

England must also decide who replaces Trott at number three in the batting order for the second Test in Adelaide, which starts on 5 December.

Harmison, who retired at the end of the summer after 17 years at Durham, believes Kevin Pietersen should not be promoted from number four.

"Pietersen does not want to bat at three and I think there are better options," he said. "We have a recognised opener in Joe Root who can go in and face the new ball [at number three].

"If you start playing with Pietersen's mind, you're weakening the side if he's not happy playing at three, which he's stated before.

"I would not move Ian Bell to three because whoever comes in at six will be very young with few Test matches behind them. That would put vulnerability on the middle order."

However Vaughan, who skippered England from 2003 to 2008, feels Bell, who bats at five, is ideally suited to moving up.

"The number three position is pivotal," he said. "I'd go with Ian Bell. I'd keep Root down at five and say to Bell: 'You're such a good player, take on the number three role.'

"I would not be surprised to see them go for Ben Stokes and bring Monty Panesar in. They have options."