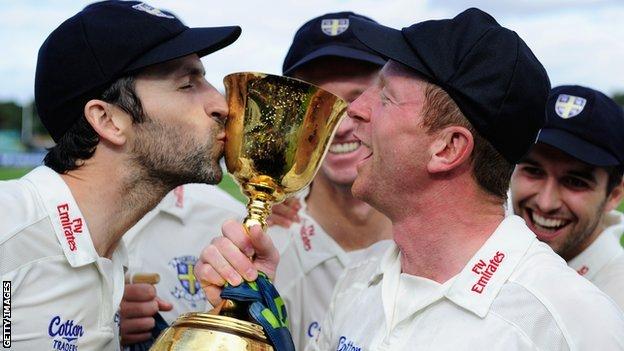 County champions Durham will travel to promoted Northants for the first game in defence of their title.

The 2014 season gets under way on 23 March when Durham face an MCC XI in Abu Dhabi in the four-day curtain-raiser.

They will then have to wait until 13 April for their first Championship game as they are not involved in the opening round of matches, beginning on 6 April.

The NatWest T20 Blast starts on 16 May with holders Northants at Yorkshire and the Royal London One-Day Cup in July.

Opening round of County Championship fixtures

The new 50-over competition, which begins on 26 July, replaces the YB40, which ended this summer when Nottinghamshire defeated Glamorgan by 87 runs at Lord's.

The County Championship will start four days earlier than in 2013, but will only finish one day earlier, with the final round of matches beginning on 23 September.

Major changes for the new season will see the majority of Championship fixtures beginning on Sundays, instead of Wednesdays, and teams earning five points for a draw instead of three.

The England and Wales Cricket Board says the points change will "provide greater reward for hard-fought draws and matches where bad weather has affected the outcome".

The highlight of the opening round of Championship fixtures will see Lancashire - this summer's Division Two champions - returning to the top flight with a game against Notts, who have signed Australia pace bowler Peter Siddle as their overseas player for 2014, at Trent Bridge.

Sussex v Middlesex is the only other Division One fixture scheduled for 6 April, but there are three games in the second tier.

Both of this summer's relegated sides will be among those in action.

Surrey, who will be hoping skipper Graeme Smith stays injury-free after missing most of the 2013 season after undergoing ankle surgery, are at home to Glamorgan at The Oval while Derbyshire make the short trip south to play Leicestershire at Grace Road.

Durham join the fray at Northampton a week later, with skipper Paul Collingwood beginning what may be his final season in county cricket before pursuing a career in coaching, and will follow that with home fixtures against Somerset and 2013 runners-up Yorkshire, starting on 20 April and 7 May.

With Lancashire back in Division One, next summer will see the first Roses clashes in the Championship since 2011.

Yorkshire will stage the fixture that begins on Sunday 25 May at Headingley, with the re-match taking place at Old Trafford from 31 August.

Both limited overs competitions have undergone format changes, with new sponsors and only two groups of nine teams, instead of three as in previous years.

The T20 Blast will spread out over a period of more than two months, with the final round of group games on Friday 25 July, with the quarter-finals taking place from 1-3 August.

Edgbaston will play host to finals day for the sixth time on Saturday 23 August, six days later than this summer.

Scotland, Unicorns and the Netherlands will not be involved in the One-Day Cup, their involvement in the county game having come to an end with the demise of the 40-over competition.

The final at Lord's will take place on 20 September and, as in 2013, will come before the final round of Championship fixtures in which Durham will travel to 2012 champions Warwickshire.