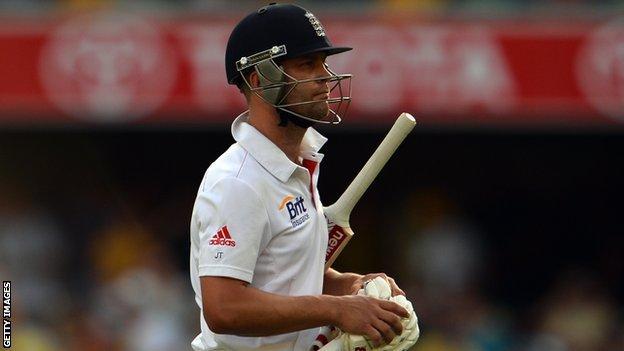 England's Jonathan Trott has left the Ashes tour of Australia because of a long-standing stress-related condition.

Batsman Trott scored 19 runs in two innings during England's first Test defeat and struggled against the bowling of Mitchell Johnson.

England coach Andy Flower added: "He needs time away from this environment and time with his family."

Trott batted in all 10 innings when England retained the Ashes during the summer, averaging 29 runs, but he was dismissed for 10 and 9 during the first Test defeat at the Gabba.

"I cannot currently operate at the level I have done in the past," said Trott, whose club Warwickshire offered their full support.

"My priority now is to take a break from cricket so that I can focus on my recovery."

Trott's display in Brisbane was described as "poor and weak" by Australia's David Warner, who also claimed England's batsmen had "scared eyes."

England captain Alastair Cook said the comments were "disrespectful," a view shared by Flower, who said Warner's remarks had no impact on Trott's decision to leave.

"Jonathan has been struggling with this condition for quite a while," added Flower. "We have been on tour for about a month and he has had his ups and downs through that month and it is not directly related to that.

"I would also say players commenting to fellow professionals in the media is disrespectful and I think on this occasion he [Warner] has got that horribly wrong."

England will stay in Australia until early February, with a two-day fixture against a Chairman's XI starting on Friday, before the second Test in Adelaide on 5 December.

Flower believes selecting Trott was the correct decision and is hopeful the 2011 ICC and ECB Cricketer of the Year will return to the international setup in the future.

England's performance squad, which provides back-up to the main party, is also in Australia, but no immediate replacement for Trott has been called into Cook's squad.

Ian Bell could move up the order to number three, while the spare middle-order spot will be filled by Jonny Bairstow, the uncapped Gary Ballance, or all-rounder Ben Stokes, who would offer an extra bowling option.

Angus Porter, head of the Professional Cricketers' Association, said Trott's decision to end his tour was a "brave" one and that his organisation was ready to offer any help to the Warwickshire man.

He added: "It would have been much easier in many ways to plough on, and not address the problem, and maybe that's what people would have done 10 or 20 years ago and we'd never have known why they performed badly.

Trott made his England debut in the decisive fifth Test of the 2009 Ashes series and his century helped England secure a victory which regained them the urn.

He is ranked number eight in the world rankings for ODI batsmen and is in the top 15 in the five-day format.

However, he becomes the third England cricketer to depart a tour with a stress-related illness in recent years.