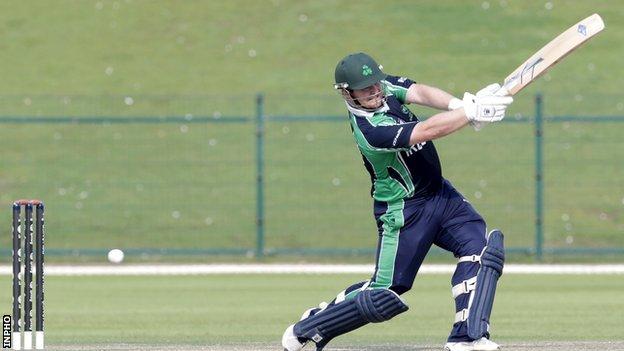 Ireland secured qualification for next year's World Twenty20 by extending their unbeaten record in Group A of the qualifiers with a win over Hong Kong.

Ireland set a formidable target of 207-4, while Hong Kong were all out for 122 after 17.1 overs in reply, leaving Ireland with an 85-run winning margin.

Paul Stirling starred with both bat and ball, scoring 77 in Ireland's innings and then taking 4-10.

Ireland will now play their semi-final in Abu Dhabi on Friday.

Afghanistan have also secured their qualification by beating Kenya by 48 runs in Group B.

Irish skipper William Porterfield won the toss at the Sheikh Zayed Stadium and Ireland decided to bat first for the sixth match in a row.

The one surprise in the starting XI saw James Shannon come in for Niall O'Brien, the first change to Ireland's line-up throughout the tournament for a match in which they needed one point to qualify for the World Twenty20.

Phil Simmons's side went into the game having won five of their six qualifiers, with the tie against Italy abandoned because of rain before a ball was bowled.

Ireland got off to a flying start thanks to an opening partnership of 91 between Porterfield and Stirling.

Porterfield contributed 38, but Stirling thrashed his 77 off just 45 balls, including consecutive sixes at the end of his innings.

Kevin O'Brien scored 62 not out off 27 balls and smashed 24 runs off the last over of the innings.

Gary Wilson made 19, John Mooney five and Trent Johnston was one not out.

The best of the Hong Kong bowlers was Nizakat Khan with two wickets, while Aizaz Khan and Nadeem Ahmed took one apiece.

Hong Kong began their innings promisingly and reached 92-3 but a series of dismissals saw them struggling at 114-7 and they were subsequently bowled out after adding just a further eight runs.

JJ Atkinson was their top scorer with 48, with Stirling taking four wickets, George Dockrell two, and Max Sorensen, Alex Cusack and Shannon one, with one run-out.

Six of the 16 teams competing in the two groups will qualify for next year's World Twenty20 tournament in Bangladesh.