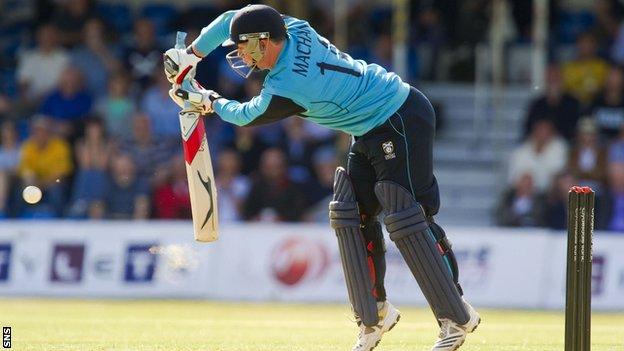 Scotland will face Italy in the fifth-place play-offs of the World Twenty20 Qualifier after finishing fourth in Group B.

Matt Machan's 90 not out helped the Scots to a 75-run win against Denmark in their final group match in Dubai.

And Kenya's defeat by Afghanistan meant Scotland claimed fourth position and progressed to take on the Italians, who ended Group A in fifth.

The match in Abu Dhabi will take place on Wednesday.

And the winner will play the loser of Netherlands v United Arab Emirates.

After winning the toss and electing to bat, the Scots got off to a poor start against Denmark with opener Richie Berrington departing for just four in the first over as he was bowled by Basir Shah.

Machan came to the crease and set about getting Scotland back on track with Calum MacLeod.

The pair were just one short of putting up a century partnership when the latter was stumped by Freddie Klokker off the bowling of Michael Pedersen.

Michael Leask put on 62 with Machan before Klokker made a catch off the bowling of Basit Raja.

Rob Taylor's unbeaten 17 followed and Machan walked off 10 short of a century after facing 55 balls with four sixes and nine fours.

The Danes were a wicket down in reply before putting any runs on the board as Majid Haq caught Yasir Iqbal off the bowling of Neil Carter.

Carsten Pedersen's 43 boosted Denmark's hopes but they were unable to get near the run-rate as Carter, Machan, Safyaan Sharif, Haq and Gordon Goudie claimed wickets.