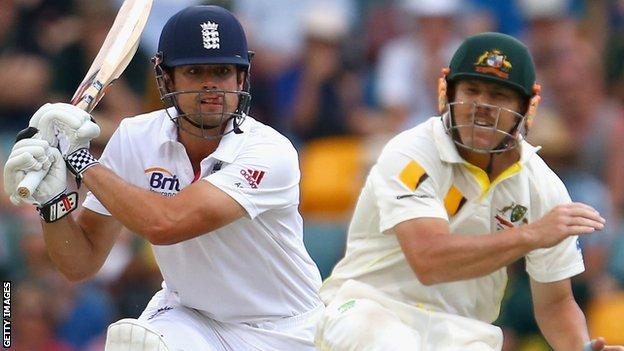 England captain Alastair Cook branded Australian opener David Warner "disrespectful" after his side were thrashed by 381 runs in the first Test.

Cook's men were dismissed for 179 on the fourth day at the Gabba to slip to their second biggest away Ashes defeat.

Through my career there's always been banter on the cricket field. I cop as much as I give, that's for sure

Cook said: "I think the comments were pretty disrespectful to any professional cricketer."

Warner's remarks were just one of several flash-points in an often bad-tempered match.

"When you play each other quite a few times in a row, the niggles can increase," added Cook.

"On the pitch it's pretty much a war, isn't it? There are always going to be a few battles and a few words, but on the pitch is fine.

"There were a lot of things said that we think have been disrespectful, but you have to give the Aussies credit for how they played."

Late in a day marked by frequent verbal exchanges between the two teams in the middle, television stump microphones picked up Australia captain Michael Clarke telling number 11 batsman James Anderson to "get ready for a broken arm" as he faced rampant pace bowler Mitchell Johnson.

But Clarke insisted afterwards that he and his players had done nothing unusual.

He said: "I'm not going to go into what's been said on the field - I think that's part and parcel of the game.

"I've heard a lot worse said on the cricket field than anything the Australian players or the England players have said throughout this Test match.

"Both teams want to win so badly. We all respect the traditions of the game - there is a line, and both teams should not overstep that line.

"I'm sure there's plenty of things that are said on the field that you won't overhear on the stump microphone. There is certainly no single England player that we have any vendetta against."

Clarke also insisted his side have no problem with Cook's men.

He said: "I can only talk for me and the Australian team, but the respect is certainly there.

"If there is a case the ICC will talk to David (Warner) or go through Cricket Australia.

"It's tough, hard-fought cricket, and I think the people watching, the people who come to the ground, have seen that.

"Through my career there's always been banter on the cricket field. I cop as much as I give, that's for sure."

England had again been unable to cope with the pace and aggression of Johnson, who finished with match figures of 9-103.

They seldom looked like batting through Sunday, let alone Monday's fifth day as they had to in order to salvage an unlikely draw.

Having lost six wickets for nine runs in their first innings, they lost four in just 18 minutes in their second to go behind in an Ashes series for the first time in seven years.

Cook said: "We certainly lost the first battle. We have to go away and be honest with ourselves about how we go about putting it right.

"We've not been surprised by Mitchell Johnson - he's bowled well and put us under pressure, but we've faced him a lot in the past and had success against him."

Johnson dismissed Trot in both innings and the England number three has struggled individually.

"He (Trott) has had a tough game, he knows that," said Cook. "But you have to remember that he's a class act. He's a very, very good player.

"He's had a little blip in these last couple of games, but he's a class player and class players bounce back.

"This side has plenty of character and we've fought back in the past. We are going to have to come back and show our ability."