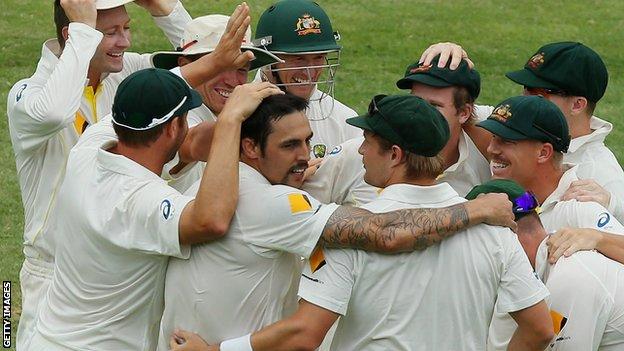 England slumped to a humiliating 381-run defeat in the first Test as Mitchell Johnson once again blew their fragile batting away.

Facing a target of 561 to win, or two days to bat through for the draw, England disintegrated from 142-4 to 151-8 and then 179 all out late on the fourth day to go behind in an Ashes series for the first time in seven years.

"This could have long-term effects, because England have been blown away. People are trying to avoid facing Mitchell Johnson.

"They will know they have a lot of soul-searching to do. They have to come out with a different mindset in Adelaide. This is one tall order, a bigger challenge than coming back to win in India.

"This England side have a lot of character. However, I have the sense that Australia are a better side, that's what we began to see in the English summer."

Only captain Alastair Cook with 65 offered any prolonged resistance as his side lost four wickets for nine runs in 18 frantic mid-afternoon minutes at the Gabba.

Poor shots cost Kevin Pietersen and Matt Prior but Johnson was rampant as he finished with 5-42 to go with his 4-61 in the first innings.

This was sweet revenge indeed for the left-arm fast bowler, a figure of fun when he recorded figures of 0-170 here three years ago but man of the match this time around.

It was England's second biggest defeat in Ashes cricket in Australia, in terms of runs, and leaves them with several critical issues to address before the second Test begins in 11 days.

Australia had lost seven of their last nine Tests coming into this game, and had not won in the five-day format since last January.

But they have dominated the last three days at a ground that has not seen an Australian Test defeat in 25 years, and appear a side transformed from the unsettled, insecure unit that has struggled badly for so much of the past 12 months.

With only a two-day game against a weak opposition in Alice Springs to come before the second Test in Adelaide, it is England - 3-0 victors in the corresponding series three months ago - with all the headaches.

Cook and Pietersen had begun the day looking comparatively comfortable, the pitch still doing little to assist the bowlers despite the emergence of a few cracks.

They had taken the overnight score of 24-2 up to 72 when Pietersen tossed all that diligence away by taking the short-ball bait from Johnson and pulling straight to substitute fielder Chris Sabburg at long leg.

It was a dismal way to get out in the circumstances, even if England's task was already near impossible.

Pietersen had fallen for the same obvious trap in the Sydney Test on England's last tour down under, and can expect more of the same as this series continues.

Cook was contrastingly cautious. His half century - the third slowest of his Test career - came off 158 balls and was greeted with the most muted of acknowledgments.

He and Ian Bell then dealt extremely well with a nasty spell of fast bowling from Johnson and Ryan Harris, swaying from the path of the short stuff and keeping hands low.

It took some surprise extra bounce from Peter Siddle to have Bell caught behind by Haddin for 32 with the score on 130, and although a spectacular sub-tropical storm then saw the outfield covered in hail and puddles, it delayed play for just an hour and a half - an inconvenience to Australia rather than a lifeline for England.

If anything it interrupted Cook's previously excellent concentration.

In the second over after the restart he tried to cut Nathan Lyon but was caught behind for 65, and in that moment any crazy hopes of a rescue act to match that of three years ago finally disappeared.

"I think Alastair Cook would bite your hand off if you offered him retaining, rather than winning the Ashes. Perth should have more pace and bounce than Brisbane, so England could easily go 2-0 down in that match (the third one). They need to find a way of winning matches on these wickets."

In the off-spinner's next over, Matt Prior played needlessly at a ball outside leg stump and deflected it straight to leg slip for a paltry four, leaving his side 146-6.

That became 151-7 when Stuart Broad gloved the rampant Johnson down the leg-side, and when Swann went for a second-ball duck - chasing a wide one and edging it to Steve Smith at third slip - England had lost four wickets for nine runs.

Another rain shower briefly delayed the inevitable, but when play resumed in the late afternoon sun, Ryan Harris had Chris Tremlett caught by George Bailey at short leg for seven.

And although Joe Root hung around for 86 balls for a 26 not out, Johnson caught and bowled James Anderson for two to trigger wild celebrations among his team-mates.