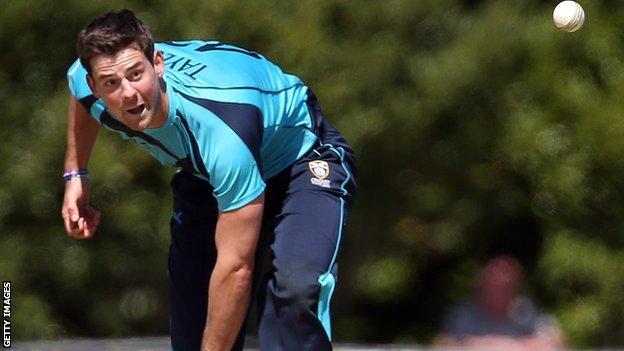 All-rounder Rob Taylor is confident Scotland can extend their winning "roll" in the last Group B World Twenty20 qualifier against Denmark.

Wins over Papua New Guinea and the Netherlands have kept Scotland's hopes of progressing alive.

"If we play the good cricket we've played the last couple of games there should only be one winner," he said.

"But you can't underestimate the opposition, they pushed Afghanistan to the wire a couple of days ago."

The Scots need to finish in the top five to have a chance of making the play-off stages and currently sit fifth in their group after six games.

Denmark are bottom of Group B without a win.

"If we win we go through and it's just a case of playing for position in the second stages. The higher up the table we get, the easier it will be for us.

"Even if we don't get into the top three spot then I'd back ourselves to win the couple of matches in the next round to get through."

Scotland started their seven Group B qualifying games with losses to Bermuda and Afghanistan.

A victory over Nepal put Pete Steindl's men back on track before a defeat to Kenya brought them back to down earth.

However, the impressive wins against PNG and the Netherlands have raised hope of qualification for the 2014 Twenty20 World Cup once more.

"We may have been slightly down earlier in the tournament but now with two wins from two we feel like we're on that roll," said Taylor, who plays county cricket for Leicestershire.

"We had today [Saturday] off so we had a team meeting this morning, basically looking into Denmark's side and coming up with a couple of plans for certain players in their team.

"We all know our individual roles in the side and it's just a case of believing everyone's in that side because they're good enough and backing ourselves to be successful on the day.

"Everyone's positive. The talk is very positive around the camp and that's what you want in the situation. Everyone's feeling good and we're playing good cricket so it's a happy place to be."

Taylor was certainly content with his contribution in the previous two games, taking three wickets against PNG and scoring 41 runs versus the Netherlands to claim consecutive man of the match awards.

"Yes it was massive," he added.

"I probably hadn't been at my best or certainly where I wanted to be so to get that and the confidence and a bit of form under my belt is always good.

"With Twenty20, if you get on a roll you take that on and you take the momentum forward."