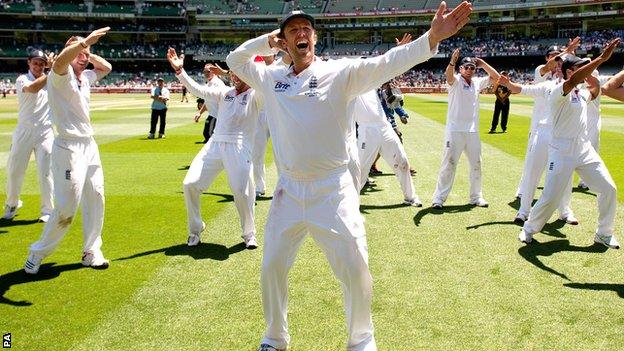 The Boxing Day Test at the Melbourne Cricket Ground is etched firmly into Australian culture, and it is never better at the MCG (or just "the G" to locals) than when the old enemy visits.

Comfortably the largest cricket stadium in the world, redevelopment for the 2006 Commonwealth Games pushed capacity to over 100,000 for a venue which has been home to Australian rules football, rugby, soccer, rock concerts and the 1956 Olympics.

It has hosted the inaugural Test in 1877, the first one-day international in 1971, more Tests than anywhere except Lord's, and will stage its second World Cup final in 2015.

Melbourne is always popular with England fans, and its leisure attractions include a set tour of popular Australian soap opera Neighbours.

The MCG in numbers

First Ashes Test: The Sporting Times's "obituary" was published after Australia's win at The Oval in August 1882, so the Ashes were at stake for the first time between 30 December 1882 and 2 January 1883. Australia won by nine wickets.

Boxing Day at the MCG

Highest individual Ashes score: 307 by Australia's Bob Cowper in February 1966, the highest Test score in Australia until Matthew Hayden flogged Zimbabwe for 380 in 2003.

Most Ashes wickets: 46 by Australia off-spinner Hugh Trumble in seven Tests between 1894 and 1904. 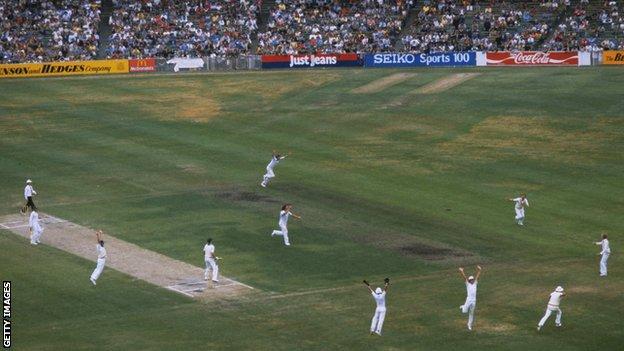 While the Centenary Test in 1977 was enthralling, Wisden described 1982's close encounter as "a magnificent Test, to be ranked among the best ever played". Only 10 runs separated the four innings totals.

Chris Tavare (89) and Allan Lamb (83) rescued England from 56-3 as they posted 284, and Australia made 287 as Kim Hughes, David Hookes and Rod Marsh hit half-centuries.

Another early collapse left England 45-3 before Graeme Fowler (65) and Ian Botham (46) steadied the ship and the last three wickets added a priceless 93 runs.

Australia had two days to score 292 for victory, but rookie paceman Norman Cowans tore into them, taking 6-77, and when Allan Border was joined by last man Jeff Thomson, Australia were 74 short.

Captain Bob Willis spread his field wide for Border, offering him a single so England could target Thomson. Border turned down many such singles, but he and Thomson kept chipping away at the target.

By the end of day four, they were halfway there, needing 37 to win, and free admission was offered for a fifth day which could have lasted only one ball. Still Willis kept the field back for Border, and still the total came down.

With four runs needed, Willis turned to England's talisman. "Ian Botham is going to have one last crack at Jeff Thomson," Henry Blofeld told TMS listeners, and Thomson's dogged resistance ended as he flashed at a wide delivery, and the ball flew off the edge.

Second slip Tavare could only parry the ball into the air, but Geoff Miller ran behind him at first slip to complete the catch. It was Botham's 100th wicket against Australia, and England had sneaked home. The three-run margin of victory equalled a Test record, although it has since been surpassed.

What happened next? England's victory kept the series alive, but Australia won in Sydney to triumph 2-1.

Thomson and Miller played only three more Tests each. Thomson remains an acerbic media pundit, while Miller became an England selector in 2000, chairing the panel from 2008 until resigning in October 2013. 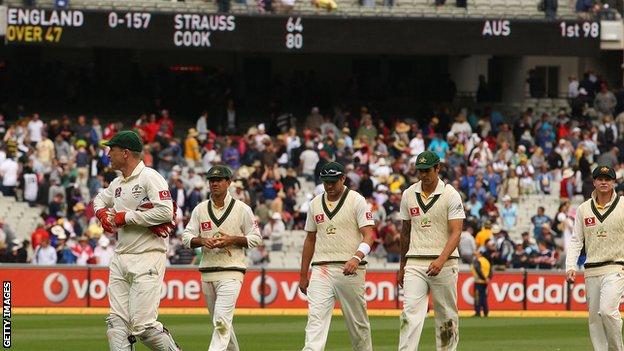 Win the toss, put them in, bowl them out, and overhaul their total without losing a wicket. Is this the nearest England's travelling fans will ever come to a perfect first day of a Test?

After a defiant draw in Brisbane, a thumping victory in Adelaide and a setback in Perth, the 2010-11 series was level at 1-1 by Boxing Day. England dropped Steven Finn for fellow seamer Tim Bresnan, while Australia kept faith with the four-pronged pace attack which served them well at the Waca, and captain Ricky Ponting played despite a broken finger.

Lowest score against England at MCG

Lowest against England since 1968

Lowest against England at home since 1936

Lowest by Australia at home since 1984

Even the previously unshakeable Mike Hussey fell cheaply. Three wickets fell with the score on 77 and, despite some tail-end swiping, they were skittled for 98, Australia's lowest Test score against England at the MCG.

Michael Clarke top-scored with 20, with all 10 wickets falling to catches behind the wicket - six to wicketkeeper Matt Prior and four to the slip cordon.

It meant England still had 47 overs to face. But Strauss and 2010-11 Ashes run machine Alastair Cook did so with little fuss as Australia's pacemen misfired and Perth hero Mitchell Johnson was mercilessly taunted by the Barmy Army.

Strauss and Cook received a huge ovation when they ended that perfect day on 157-0, while anyone waking in the UK (it was 07:50 GMT) may have wondered if they had overdone the Christmas festivities, such was England's dominance.

"In Andrew Strauss's wildest dreams, he couldn't have hoped it would turn out like this," was Jonathan Agnew's verdict on TMS. Summariser Justin Langer felt he had "just lived through a nightmare".

What happened next? Strauss and Cook fell early on day two, but Jonathan Trott made 168 not out in England's 513.

Needing 416 to make England bat again, Australia were bowled out for 258 and England retained the Ashes, celebrating with a "Sprinkler Dance" led by Graeme Swann on the outfield.