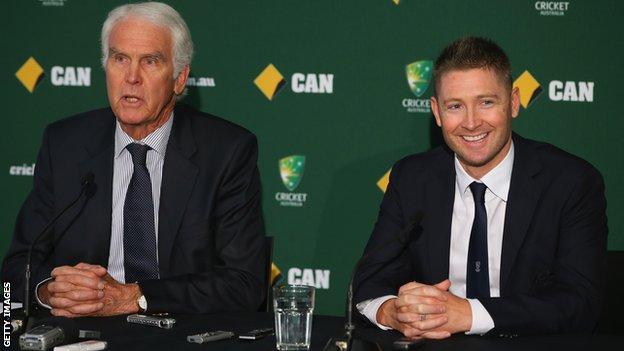 In naming their squad more than a week before the first Ashes Test, Australia are showing a confidence and stability that were conspicuous by their absence during their preparations for the series in England last summer.

Back then, Australia were in total disarray. The David Warner bar-room brawl, the last-minute change of coach and the left-field selection of Ashton Agar for the first Test all spoke of a total lack of strategy and togetherness.

They were a laughing stock and by the time they pulled themselves together in the second half of the series, the Ashes were already gone.

This time round, there is a calm and clarity of thought about Michael Clarke's team which suggests they will be a much tougher proposition on home soil.

In keeping faith with 10 of the side that played in the final Test at The Oval, and adding two of their in-form one-day players in George Bailey and Mitchell Johnson, Australia are showing that they are comfortable with their personnel and want to spend the next week fine-tuning their plans for that all-important first Test in Brisbane.

At 31, Bailey would become the oldest Australia batsman to make a Test debut for more than 34 years. Age should never be a barrier to selection and the Tasmanian has earned his call-up through sheer weight of runs in one-day cricket over the past 18 months.

To me, he looks a highly intelligent cricketer who has proved he can handle the pressures of international cricket very well.

There aren't too many more intimidating places to play than in front of packed houses in India and Bailey's performances there in the recent one-day series - he scored 478 runs at an average of 95.6 - were of the highest order.

What Bailey must now show is that he has the technique and mental strength to translate that form into the Test arena, where the bowling and the field placements will be that much more attacking and the pressure cranked up an extra notch.

Bailey has a fairly modest first-class record, but so did Michael Vaughan and Marcus Trescothick when they were first picked for England by coach Duncan Fletcher and it soon became pretty obvious to everyone that they had what it takes to be high-class Test cricketers.

Johnson is probably the biggest gamble in Australia's squad. The left-arm quick is a potential match-winner, but also a potential match-loser if his radar fails as it did in the last two Tests of the 2010-11 Ashes.

Australia will be eager to have some cover for Johnson in case his line and length do go badly astray, so the make-up of their final XI may depend on whether Shane Watson is fit enough to bowl following his hamstring strain.

England, meanwhile, have two question marks remaining over their final Test line-up with the identity of their third seamer yet to be decided and a slight concern over the fitness of wicketkeeper Matt Prior.

I expect the bowling berth to be a straight shoot-out between Steve Finn and Chris Tremlett.

The fact that Tremlett was selected for the rain-hit draw against Australia A in Hobart suggests he has his nose slightly in front, but Finn will know that if he outbowls the Surrey man in the final warm-up match against an Australia Invitational XI in Sydney he could well get the nod for Brisbane.

England will not want to take any risks on Prior but it is my understanding that his calf tear of the lowest grade of severity, and that he should therefore be fit for the first Test.

It is crucial for England that Prior does play, as much for his skills as a world-class all-rounder as for his leadership and influence in the dressing room.

He is the one England player who does not really have a ready-made replacement in the squad, given Jonny Bairstow's relative inexperience as a keeper.

Bairstow's involvement as a specialist batsman in the England set-up has limited his appearances for Yorkshire and he remains something of a work in progress behind the stumps.

He has the perfect tutor in England wicketkeeping coach Bruce French, but for him to keep wicket in an Ashes Test with such a small amount of experience would be a big ask.