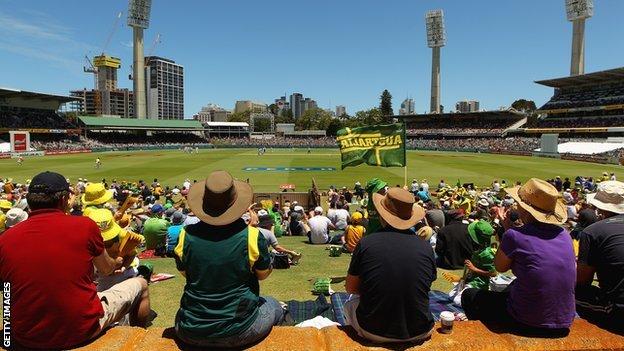 Historically, England squads would arrive in Perth by boat after a journey lasting several weeks. But, while it was a regular venue for the first warm-up game of Ashes tours, Perth only became a Test venue in 1970.

The ground known as the Waca, an acronym for the Western Australian Cricket Association, has traditionally produced pitches offering pace and bounce, especially when the sea breeze known as the Fremantle Doctor comes calling in the afternoon.

As in Brisbane, England have a disappointing Test record at Perth, with only one victory. Even Mitchell Johnson found his radar there on England's last visit with a devastating performance in an otherwise wretched series for him.

Perth, like Adelaide, is a good destination for wine buffs, with the Margaret River area a popular excursion for visiting fans.

The Waca in numbers

First Ashes Test: 11-16 December 1970. England's Brian Luckhurst and John Edrich and Australia's Ian Redpath and Greg Chappell made centuries before Australia were set 245 to win in two and a half hours on the last day. Captain Bill Lawry showed no enthusiasm for the chase, taking 68 minutes to score his first six runs as the match was drawn.

Highest individual Ashes score: 171 by Australia's Ian Redpath, who made his highest Test score in the inaugural Perth Test in 1970. It took him more than six hours.

Most Ashes runs: 431 by ex-England captain David Gower, who averaged 61.57 in four visits to Perth, with two centuries.

Best Ashes bowling (innings): 8-97 by Australia paceman Craig McDermott on the first day of the final Test in February 1991.

Most Ashes wickets: 17 by McDermott - mainly thanks to the aforementioned 8-97 - and fellow Australia seamer Glenn McGrath.

If Brisbane has not often been a happy hunting ground for England, their record at Perth is even more modest: they have won only once there.

In 1977, Kerry Packer's "rebel" World Series Cricket (WSC) had robbed the "official" Australia side of many of its leading players. Tony Greig lost the England captaincy when it was revealed he had helped recruit players for WSC, and his replacement Mike Brearley led England to a 3-0 win that summer.

A year later, an under-strength Australia were still lacking their World Series players and were skippered by young batsman Graham Yallop. England won the opening Test at Brisbane for the first time since 1936.

After Yallop won the toss, Geoff Boycott compiled a characteristically painstaking 77 in seven and a half hours, while a young David Gower completed his second Test century, as England made 309.

Australia struggled against the four-pronged pace attack of John Lever, Ian Botham, Bob Willis and Mike Hendrick, and only Peter Toohey, who made 81 not out at number five, passed 25 as the hosts perished for 190.

Brearley - nicknamed "The Ayatollah" by Australians after he grew a bushy black beard - Graham Gooch and Derek Randall gave England a solid start in the second innings, but no batsman reached 50 as the tourists were bowled out for 208 late on day four, leaving Australia chasing 328 for victory.

Opener Graeme Wood led the way with 64 but lacked support apart from Gary Cosier (47), and the last six wickets fell for 40 runs as Australia slumped to 161 all out, with left-armer Lever (4-28) doing the damage.

Rodney Hogg, playing only his second Test, had the burden of leading an Australia attack missing spearheads Dennis Lillee and Jeff Thomson, and earned the man-of-the-match award in a losing cause after taking five wickets in each innings.

What happened next? Despite losing the third Test in Melbourne, England won the last three Tests for a crushing 5-1 series win. It remains their biggest margin of victory in an Ashes series.

After Australia's cricketing authorities agreed a truce with Packer and the World Series players returned, England came back to Australia for a three-Test series the following winter, 1979-80, when the Ashes were not at stake. In the opening Test at Perth, Dennis Lillee famously tried to use an aluminium bat in the first innings, and in the second, the scorecard read: Lillee, caught Willey, bowled Dilley. 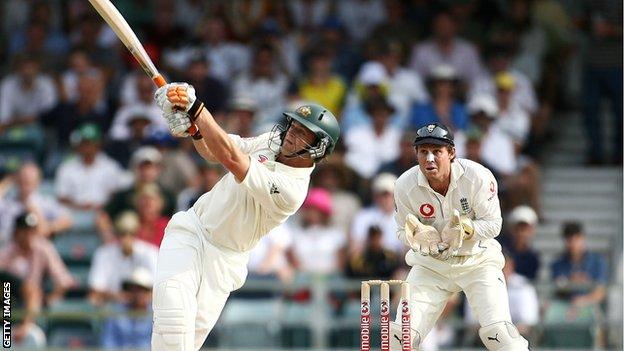 England arrived in Perth in December 2006 after a 277-run hiding in Brisbane, and a defeat snatched from the jaws of a probable draw in Adelaide.

With the Ashes on the line, they replaced James Anderson with fellow Lancashire seamer Sajid Mahmood, and spinner Ashley Giles with Monty Panesar.

Australia won the toss and made 244, while Panesar justified his selection by becoming the first English spinner to take a five-wicket haul in Perth, and then added 40 for the last wicket with Steve Harmison to push England's score to 215, a deficit of 29.

Justin Langer was bowled by the first ball of Australia's second innings, but normal service was resumed as Matthew Hayden (92), Ricky Ponting (75) and Mike Hussey (103) piled on the runs.

At 365-5, with Australia leading by 394 on the third afternoon, Michael Clarke was joined by wicketkeeper Adam Gilchrist, one of the world's most destructive batsmen but on a "pair" after a first-innings duck.

Born in New South Wales, Gilchrist had joined Western Australia early in his career and thrilled his home crowd, reaching his fastest Test fifty in only 40 balls and then launching a savage attack on Panesar, hitting him for 24 in an over, including three sixes.

Three fours in four balls off Harmison took him to 93 from 51 balls, within striking distance of Sir Viv Richards' record of the fastest Test century of all time - 56 deliveries.

With his score 97 from 54 balls, a wide delivery from Matthew Hoggard out of Gilchrist's reach brought a dot ball, but a single and a two ensured he reached three figures off one ball more than Richards.

What happened next? Ponting declared on 527-5 at the end of that over, with Clarke unbeaten on 135 and Gilchrist 102. Set 557 to win, England were bowled out for 350 and surrendered the Ashes.

Gilchrist's knock remains the second fastest in Test history. He retired from internationals in 2008 but continued to play Twenty20 cricket into his forties.