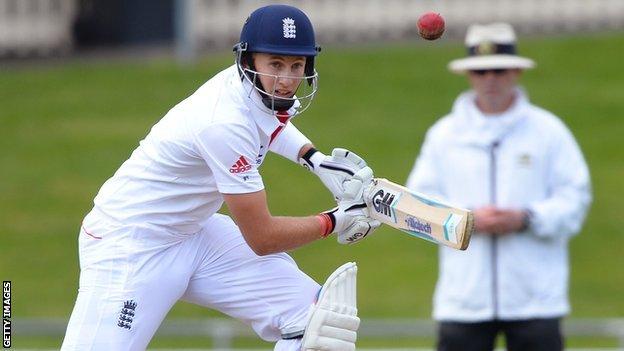 Joe Root made an unbeaten 58 as England's rain-hit Ashes warm-up game with Australia A finished as a draw.

After two days were washed out, England retired openers Alastair Cook (154) and Michael Carberry (153) as rain delayed the start, and they resumed on 318-2.

Jonathan Trott, Kevin Pietersen and Gary Ballance fell cheaply, but Root impressed in the middle order as England declared at 430-7 at tea.

"England were fortunate that they won the toss, as the batting has been the real plus for them from this game. The ball which got Pietersen kept cruelly low - I don't think he could have done anything about it, whether he had eight or 800. But Ballance failed again, and that may be his last opportunity - I think that may be the last we see of him until the tour game at Alice Springs. The Matt Prior situation may determine how happy England are with the day."

Matt Prior did not take the field when Australia batted because of a tight left calf, so young Root was thrust into the unfamiliar role of emergency wicketkeeper.

But barring injuries, Root's performance - and Ballance's failure - means England may be a step closer to finalising their batting line-up for when the first Ashes Test at Brisbane begins on 21 November, with Carberry having made a solid case to be Cook's opening partner, with Root moving to number six.

Drizzle meant play began late at 00:15 GMT, an hour and 45 minutes after the scheduled start.

While the scoreboard struggled to cope with the openers, who scored unbeaten centuries on the opening day, having "retired out" to give their team-mates time in the middle, Trott and Pietersen faced only two overs before the rain returned to hold up play for over an hour, while an early lunch was taken.

Pietersen, in his first innings of the tour helped himself to a couple of early fours but then fell lbw to a ball from Trent Copeland which kept very low and would have clipped leg stump.

Trott, with last week's century against a Western Australia Chairman's XI at Perth under his belt, soon followed when he edged Ben Cutting to keeper Tim Paine.

That brought Yorkshire duo Root and Ballance together, and both looked a little tentative as the pitch, which had spent more than two days under cover, finally showed a bit of life for Australia A's seamers.

Ballance did finally score his first runs in an England shirt, after a first-ball duck in Perth and a second-ball duck on his one-day international debut against Ireland in September.

But the left-hander's chances of making a Test debut at number six in Brisbane now look slim after he was trapped on the crease by Cutting with only four to his name.

Root and Prior (26) shared a useful stand of 51 for the sixth wicket, although one particular quick single may have been responsible for Prior's calf injury - and the England keeper became the third lbw victim of the innings when sweeping left-arm spinner Jon Holland.

As Carberry had on day one, Stuart Broad launched Holland for an enormous six over long-on, but he was brilliantly caught by the tumbling Usman Khawaja when trying to repeat the shot, at which point England declared.

That left one session for a belated work-out for England's bowlers.

Anderson picked up the wickets of Ashes hopefuls Alex Doolan (31), bowled by a good delivery which clipped the top of off stump, and Usman Khawaja (three) who gave Root his first catch as a wicketkeeper in first-class cricket.

Broad was more expensive, sending down several no-balls, but Chris Tremlett - still battling to be England's third seamer in Brisbane ahead of Steven Finn and Boyd Rankin - found some bounce in a tidy, economical spell.

England had initially planned to ask Australia A if substitute Jonny Bairstow could keep wicket, before changing their minds and asking Root to keep, which he did tidily.

The rain came again at 68-2 but this time it was only a brief interruption, after which Graeme Swann collected his first wicket of the tour, snaring Michael Klinger lbw for 29.

As the game drew to a close, Shaun Marsh (27) and Callum Ferguson (15) pressed their Test claims in an unbroken stand of 38, and when the draw came, England stayed on the field for some more middle practice.

The tourists complete their preparations for the first Test with a four-day game against a New South Wales XI - augmented by guest players from other states - in Sydney, starting on 13 November.