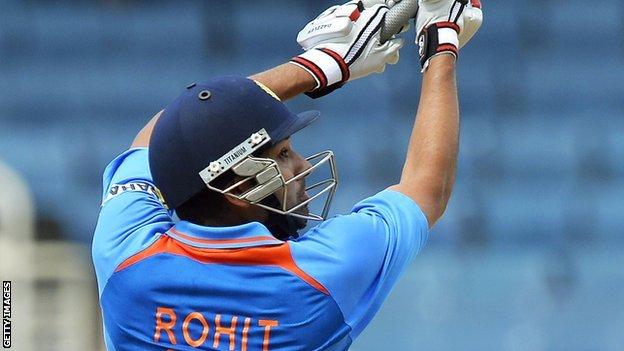 Rohit Sharma became only the third man to score a double century in one-day international cricket, smashing 209 from 158 balls as India beat Australia by 57 runs to win the ODI series 3-2.

Sharma hit the first two balls of the last over for six but was caught at deep square leg off the third, leaving Virender Sehwag's 219 as the record.

India had finished on a mammoth 383-6, with skipper Mahendra Dhoni run out off the last ball for 62 after he and Sharma plundered 101 from the last five overs - meaning the tourists required the second highest successful ODI run chase of all time to prevent India winning this high-scoring series.

They started slowly and looked dead and buried when Glenn Maxwell was caught in the deep, having made 60 from only 22 deliveries including seven sixes, to leave them 138-6 in the 23rd over.

But all-rounder Watson (49), batting down the order after he had left the field with an injury and was unable to complete his bowling spell, added 67 for the seventh wicket with Faulkner in only six overs to give the innings some impetus.

Watson and Nathan Coulter-Nile fell in quick succession but Faulkner dominated a stand of 115 with tail-ender Clint McKay (18) which was the fourth highest ninth-wicket partnership in ODI history.

Faulkner hit 11 fours and seven sixes and recorded his maiden century in professional cricket while trying to farm the strike, but just when he had reduced the target to 67 from 48 balls, India produced a couple of tight overs, before McKay was bowled by Ravindra Jadeja.

Faulkner then holed out at deep mid-wicket off the very next ball as India clinched victory with just under five overs remaining.

The match brought an exciting end to an enthralling series, which has included the second and third highest successful run chases in the ODI format after India chased down targets in excess of 350 at both Jaipur and Nagpur.

Sharma, who hit 491 runs in six innings at an average of 122.75 to win the man of the series award, said after his marathon knock: "Getting a 200 in the ODI format is a wonderful feeling.

"We knew it's a small ground and runs are easy to come by, so we wanted to stay in and capitalise.

"I was disappointed not getting a hundred in the last game, so I wanted to play big and keep the momentum going."

Sehwag's individual record had looked under threat at one stage, after Sharma took 26 from the 47th over, bowled by spinner Xavier Doherty, who took 2-74.

But the slow left-armer was far from the most expensive Aussie bowler as seamers McKay (1-89), Coulter-Nile (0-80) and Faulkner (1-75) all took heavy punishment in their 10-over spells.

Watson had limped off after bowling only five overs, aborting the first delivery of his sixth, and batted at number eight instead of his usual number three position - but Australia's fears over an injury to one of their key Ashes Test players will have been assuaged by his batting.

The highest run chase of all time remains South Africa's 438-9 against Australia at the Wanderers, Johannesburg, in 2006.