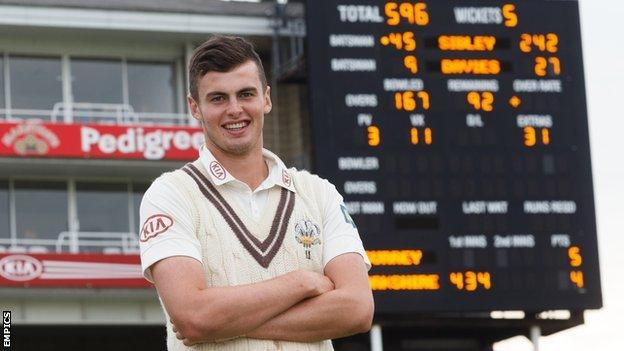 As far as first weeks back at school go, Dominic Sibley's has not been too bad.

As the 18-year-old Surrey opening batsman settled back into the classroom at Whitgift School, he did so as county cricket's new record breaker after hitting 242 in last week's County Championship draw with Yorkshire.

Then, on Thursday, he was named in the England Under-19 touring party for a tri-series in the United Arab Emirates in December, with an excellent chance of returning there for the Under-19 World Cup in February 2014.

With A-levels to sit next summer, it promises to be a busy year for Sibley, and one which will give him plenty to chat about with his classmates.

But, after being given time off school to play, it was that innings against the Tykes that left Sibley "chuffed to bits" and made him the talk of the county circuit.

"Whether you are an 18-year-old playing your third game or a 38-year-old, to achieve what he has done is almost unbelievable," former England and Surrey captain and the county's current executive director of cricket Alec Stewart told BBC London 94.9.

It was not a shock, though, to the man who has seen Sibley come through the ranks of the county's youth set-up since the age of nine: academy director Gareth Townsend.

Sibley has been on Surrey's talent pathway and, after scoring heavily at under-14 and under-15 level, was handed his second XI debut against Sussex aged 15, scoring 45.

"I wasn't surprised [by his innings against Yorkshire] because he has the ability to perform, but it is amazing that he went on to get such a big score," Townsend told BBC Sport.

"It opened the eyes of the supporters, members and followers as to what he is about.

"But it wasn't a case of throwing him in to give him some experience. He made his debut in what was our biggest game of the season in a relegation battle at Somerset.

"There were good reasons he was selected and he showed why in the last game of the season, which was an outstanding effort. We have a very talented young player."

Scoring runs - and big runs at that - has been a regular feature of Sibley's fledgling career.

Aged 15, he hit only the fourth double hundred in the history of the Surrey Championship Premier Division for club side Ashtead against Weybridge.

In February this year, he made an unbeaten 112 as England Under-19s lost to their South African counterparts by 67 runs in the second Youth Test at Boland Park, Paarl.

His progress was checked slightly by a gashed knee sustained diving for his ground on his YB40 debut for Surrey against Essex in August.

Sibley returned to score 37 against Durham at Chester-le-Street in the same competition later that month before being selected for each of Surrey's final three County Championship games in their battle to avoid relegation from Division One.

After scoring 10 and 12 against Somerset at Taunton, he made a duck in the loss to Warwickshire at Edgbaston that sealed their fate.

But his innings against Yorkshire in only his third first-class game, against an attack featuring seasoned performers Ryan Sidebottom, Steven Patterson, Jack Brooks and Adil Rashid, took him to a different level.

It was a vigil that lasted 536 balls and a minute short of 10 hours, and, as the scoreboard ticked over, the records kept falling.

Before Sibley's 242 against Yorkshire, the previous youngest double centurion in the County Championship was David Sales. He was almost 18 years and eight months old when he hit 210 not out against Worcestershire at Kidderminster in July 1996.

Not only that, but he became the second youngest to score a first-class century in England - behind only WG Grace - and the 13th youngest first-class double centurion in history.

He also became the youngest player to hit a double century in the County Championship, and ended with the highest maiden century for Surrey.

"He is still very wet behind the ears when it comes to first-class cricket, but he just did not get flustered at all," said Stewart, who played 133 Tests for England from 1990-2003.

"I loved the tempo that he batted and if he got stuck he did not change the way he batted at all. He didn't throw it away and that's the sign of a fine player.

"I've known Dominic since he was 12 or 13 and he's got a history of scoring big runs from a young age.

"It isn't new that he can bat for a long time, but to do what he's done against the opposition and the way he played is a credit to him.

"Now he will go back to school, study for his A-levels and I'd like to think we will see more of him in the second half of next season."

That will be a campaign in which Surrey will be looking to win promotion from Division Two at the first attempt.

But with The Oval production line having unearthed players including Jade Dernbach, Stuart Meaker, Rory Burns, Zafar Ansari and Arun Harinath, as well as Sibley, in recent years, Townsend believes the future is bright.

"It has been a difficult and disappointing season," he said. "When Graeme Smith came in as captain no-one set out at the start of the season thinking we would be in a relegation battle.

"He is fairly orthodox. He is a tall guy but he's got a good balanced stance and a nice rhythm to his batting.

"He uses his height well so he can handle the short ball and he knows where his off stump is, which is vital for a top-order batsman.

"He drives nicely, he can pick bowlers off his legs when they stray on to leg stump and he plays spin nicely.

"He has more work to do, as all players will have, but he has a good all-round game and one of the biggest attributes he has is his concentration.

"He loves batting and has a track record of batting for a long time. He batted for eight hours for his Under-19 Test hundred and 10 hours for his double hundred against Yorkshire, when the tempo and rhythm to his batting was consistent all the way through."

"We didn't play the cricket we wanted to stay up and we have no qualms about being relegated.

"But we have got home-grown talent coming through and there will be greater emphasis on developing that talent.

"The pressure will be slightly off in terms of the standard of cricket and it will give the likes of Harinath, Burns and Ansari the chance to develop as a team so that when we do go up again we will have a stabilised team of home-grown talent."

However, Townsend is eager not to place too much pressure on Sibley's young shoulders and insists his county career will continue to be carefully managed because of his school and England Under-19 commitments.

And he says whatever Sibley achieves in the game will be down to the work the player puts in.

"Every player dreams of representing their county," Townsend added. "He's already represented England at under-19 level and has made a big impression in a short period of time.

"He wants to play for the England senior team and knows it will take a lot of hard work.

"It would be nice for him to do that and if he does then he can achieve further England honours."