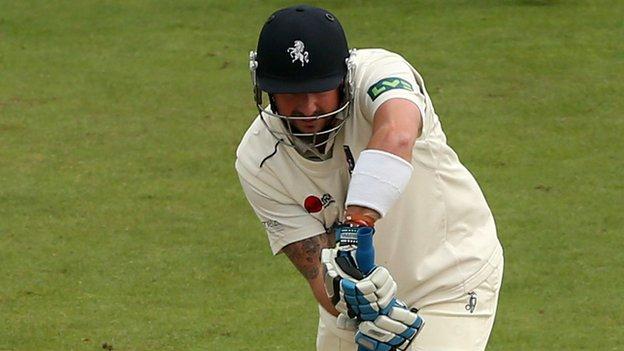 Resuming on 32-1, Kent pulled off the 12th largest chase in Championship history to reach their target, making 418-8 to win by two wickets.

Stevens plundered an unbeaten 205, just three short of his career-best.

But he needed help from Rob Key, who, batting with a broken thumb, came in at number 10, to help see Kent home.

Evoking memories of another former Kent captain, Colin Cowdrey, 50 years on from coming in with his broken arm in plaster to help England save the second Test against West Indies at Lord's, Key lasted 20 minutes, surviving 11 balls to make three not out.

Stevens had also received solid support from Sam Northeast (70) and Adam Ball, who hit 69 in a key sixth-wicket stand of 148.

Kent's victory over Lancashire ended the County Championship's only remaining unbeaten record - and helped the home side avoid the ignominious fate of finishing second bottom.

Their third Championship win of the summer lifted them above Glamorgan into seventh.

"What a game of cricket. Whether a staunch supporter or a neutral, this game had everything you could possibly wish for.

"That the game concluded with one of the all time great innings was fitting reward for both sets of fans, who could not help but marvel at Darren Stevens's dismantling of a makeshift Lancashire attack.

"Credit Lancashire for setting up an entertaining climax to a dead rubber of a match but today was about Stevens as he helped complete one of the most astounding run chases in history."