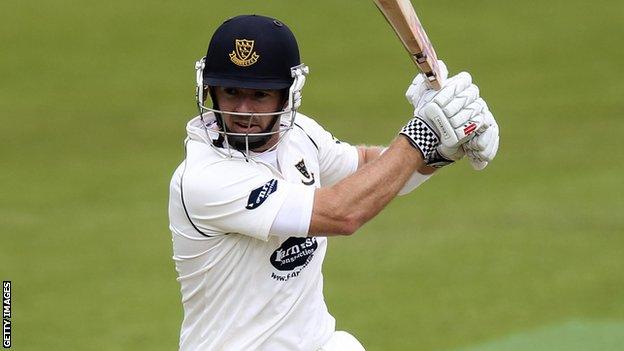 Sussex secured third place in Division One as Chris Nash's 108 led them to a six-wicket win over new champions Durham at Hove.

The victory enabled the south coast county to leapfrog Warwickshire and Middlesex and claim an £87,000 cheque.

Durham were all out for 458 after Nash dismissed Keaton Jennings for 127 and Usman Arshad made a career-best 83.

There was a notable moment shortly before the end when Durham wicketkeeper Phil Mustard was given his first bowl in 10 seasons of county cricket and promptly had Luke Wright lbw for 13 with his fifth delivery.

But the first ball of his second over was the last of the match as new batsman Ben Brown flicked it away through the leg-side for the winning boundary.

Durham had begun the day on 380-7 and looked intent on pursuing their 11th victory of the summer as Arshad hammered three sixes and 12 fours before being caught by Joyce at short mid-wicket, when the ball bounced off the Irishman's arm and he managed to grab the rebound.

However, it was Sussex who soon looked the side most likely to win as Nash and Wells saw off the new ball and then began to increase the tempo, with leg-spinner Scott Borthwick (1-120) bearing the brunt of the punishment.

Wells survived a sharp chance to Will Smith at short leg on 33, but fell 18 runs short of reaching 1,000 for the season when Onions returned and Paul Collingwood took a superb one-handed catch at slip.

Nash brought up his century off 139 balls, with 16 fours, after being dropped by Borthwick at second slip on 91, and although he, Matt Prior and Wright fell in the space of 10 overs, they were not to be denied a fifth win of the season.

"The curtain comes down on the 2013 county season on a beautiful afternoon at Hove, with Sussex beating the county champions and claiming third place in the table.

"Durham deserve enormous credit recovering from 120-6 in their second innings to reach 458, and set Sussex a difficult-looking target of 295 in 75 overs.

"However, with Chris Nash and Luke Wells adding 163 for the first wicket Sussex always looked in control, and finished the match with 10 overs remaining to claim their prize of £87,000."