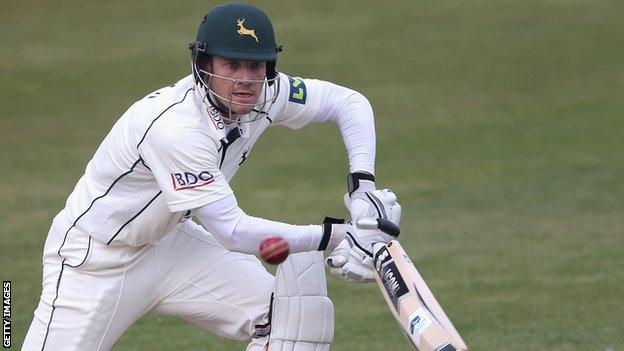 Nottinghamshire and Somerset coasted to a draw at Trent Bridge on the final day of the County Championship season.

With Derbyshire's defeat on Thursday confirming the safety of the two sides, the game had become a dead rubber.

Short of time to achieve a 334-run target, Chris Jones struck 55 not out as Somerset reached 101-1 when the captains called the match off.

Nick Compton, overlooked by England for the winter tour to Australia, scored an unbeaten 25 to pass 1,000 first-class runs for the season.

The result meant Somerset finished sixth in Division One, level on points with seventh-placed Nottinghamshire but above them by virtue of having won one game more.

Meanwhile, Somerset have released former Gloucestershire seam bowler Gemaal Hussain, 29, after three seasons on the staff at Taunton, having only made two Championship appearances this summer.

"Sadly, the season ended with a bit of a whimper rather the exhilarating climax we'd hoped for.

"Survival - plus the YB40 trophy - will leave Notts' fans with some happy memories but the winter work is already underway to renovate the championship side after a campaign of under-achievement."