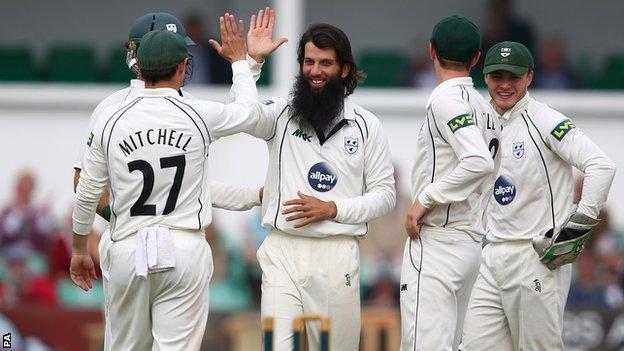 Moeen took 6-77, while fellow spinner Shaaiq Choudhry claimed 3-28 as Northants were bowled out for 141 to lose their final game by 115 runs.

Five of the Northants batsmen were leg before, to equal the Championship record of 18 LBW dismissals in a game.

Ross Whiteley blasted 56, including two big sixes, his best knock for the county, backed by Moeen (44), Tom Fell (40) and wicketkeeper Ben Cox, who hit six fours in a brisk 34.

It left Northants with almost four whole sessions to reach their target but, after sealing a long-awaited return to Division One the previous evening, the visitors buckled to the spin of Moeen and Choudhry.

Worcestershire equalled the five Division Two wins by Northants and third-placed Essex this summer, a total bettered only by champions Lancashire.

The match also highlighted Northants' need for a spearhead for their bowling attack, having failed to win any of the six Championship matches they played without prolific Australian seamer Trent Copeland.

"I'm sure they'd have had a few celebrations last night but to beat one of the sides that's going up is always nice.

"I wanted to go up this season, so I'm frustrated, especially as we've beaten some really good sides.

"But the tables don't lie. Northants thoroughly deserve to go up after a wonderful season.

"They and Lancashire are the ones that have played well consistently and it's quite right that both of them go up."

"Worcestershire completed a deserved victory when the final wicket fell, bringing to an end a remarkable 2013 season for Northants, who won the FLt20 as well as earning promotion back to Division One in the Championship.

"A target of 257 always looked a stiff one for Northants to chase down on a turning pitch, but now the celebrations can really begin with an open top bus parade in Northampton on Friday."