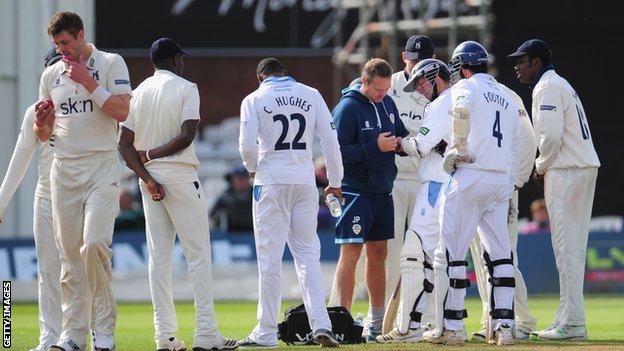 Derbyshire's relegation from Division One in the Championship was confirmed as they crashed to defeat by an innings and 168 runs against Warwickshire.

They were all out for 103 on the third morning, failing to pick up any batting bonus points, which guaranteed the safety of Somerset and Nottinghamshire.

Fast bowler Keith Barker took 5-55 for the Bears, who enforced the follow-on.

Derbyshire then managed only 120 in their second innings, lasting just 29.1 overs despite Tom Poynton's 41.

It was a tame end to their one season back in Division One for Derbyshire, founder members of the top flight when the two-division format was introduced in 2000 - and promoted back there a year ago for their first return since.

They had raised hopes of survival with three wins from five matches inside a month, but went into the game 15 points adrift of Somerset and 16 behind Notts.

And, with Somerset and Notts both piling up batting points at Trent Bridge, that had already made Derbyshire's job even harder. But the loss of 15 wickets by mid-afternoon was still a painful way to go.

Resuming on 44-5, their lower order capitulated after West Indies Test star Shivnarine Chanderpaul (52) was lbw to Barker, who went on to complete the seventh five-wicket haul of his career.

And the end of their first innings came when Tony Palladino had to retire hurt after being struck on the hand by a ball from England's latest recruit, Boyd Rankin, who has been called up for this winter's Ashes tour party.

Any hopes that they might make a better fist of things second time round were soon undermined when Ben Slater fell to on-loan Maurice Chambers in the fourth over and they quickly found themselves 38-5.

Chris Woakes, who made his Test debut against Australia at The Oval last month only to be overlooked by England this winter, took 3-36. And, with Palladino unable to bat, the Bears' top wicket taker this summer Jeetan Patel wrapped up victory by bowling Warwickshire old boy Tim Groenewald.

Wicketkeeper Stuart Poynter marked his debut with six dismissals to help earn the 2012 champions' fifth win of the summer. And that left Dougie Brown's side, ravaged by international calls and injuries all summer, waiting on the result of the Sussex v Durham game to see if they can cling onto third place.