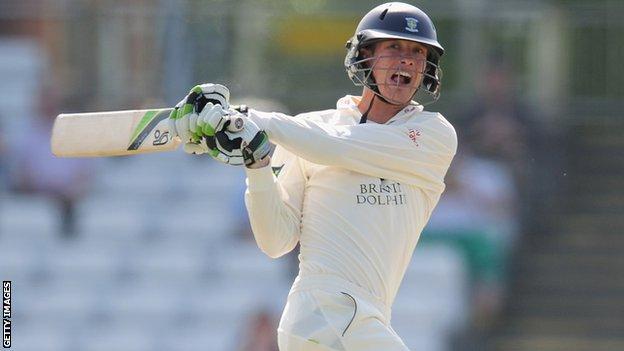 Keaton Jennings and Michael Richardson hit centuries for Durham as the new county champions turned the tables on Sussex at Hove.

Reduced to 35-3 after trailing by 164 on first innings, the visitors seemed to be heading for defeat in three days.

Ben Stokes made 45, but it was Jennings and Richardson who finally halted the slide with a 218-run partnership.

Having clinched their third title in six years last week, Durham were outplayed on the first two days of the game.

The third appeared to be going the same way too as Mark Stoneman, Scott Borthwick and Will Smith, in his final innings for the club, all went cheaply.

Paul Collingwood and Phil Mustard did not last long, but Richardson provided the support the patient Jennings needed and Sussex had to wait 56 overs for their next success.

Jennings reached his second century of the summer off 218 balls and was soon followed by the more fluent Richardson, who only needed 139 deliveries to reach three figures.

He hit three sixes and 16 fours before becoming seamer James Anyon's 50th victim of the season, but new batsman Usman Arshad underlined Durham's recovery with six fours and a six in Anyon's next two overs and ended on 38 not out.

"With Durham languishing on 120-6 soon after lunch and still needing 44 runs to avoid an innings defeat, Sussex must have thought the £87,000 prize money for finishing third in the Championship was in the bag.

"But that was to reckon without Durham opener Keaton Jennings, a model of concentration for an unbeaten 113, and Michael Richardson, who played shots all around the wicket in his innings of 129.

"Results elsewhere mean Sussex must win to claim that prize fund, otherwise they will finish fifth and out of the money and Friday should be a fitting climax to a wonderful season of County Championship cricket."