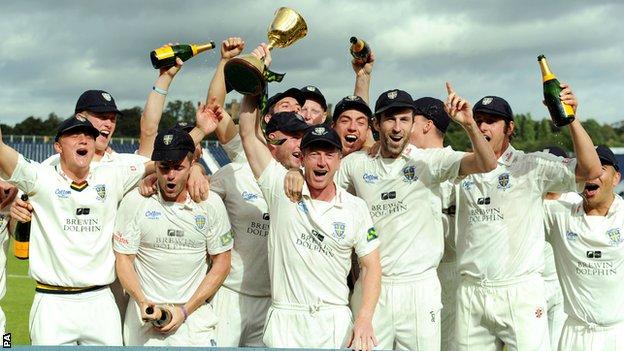 Another exciting and dramatic season of county cricket comes to an end on Friday, with the last five months of domestic action being kind to some and disappointing for others.

Durham won the County Championship, while Northants lifted the FLt20 and Nottinghamshire the YB40.

It's time for me to round off the county season by handing out some awards to the teams and individuals who have impressed me this season.

Team of the Year

It has to be Durham. It might be an obvious choice because they won the County Championship, but I have been very impressed with the manner with which they won the title.

They have had it tough, starting the season with a points deduction after they breached the salary cap last season, before their head coach Geoff Cook suffered a serious, near fatal, heart attack in June.

Durham's 10 wins is a joint-record for the number of County Championship victories since the two-division split of 2000.

However, Paul Collingwood's men still managed to come out on top for the third time in six years and the players dedicated their title win to Cook, who is now back at work.

I'm pleased for Collingwood, who is Durham through and through, and his record as captain is quite outstanding. They also reached the quarter-finals of the FLt20 which proved they are competitive in the shorter forms of the game too.

I also want to give an honourable mention to Northants, who smashed up my side Surrey in the final of the T20 and have sealed promotion to Division One.

Head coach David Ripley has done an excellent job since taking over the reins from David Capel and has a created an environment that has worked well. They are a not a team full of superstars but everyone knows their individual roles and they deliver when it matters.

Player of the Year

This is another award heading to the north east, this time for Graham Onions.

I've based this selection purely on performances in the County Championship, where pace bowler Onions has taken almost 70 wickets at an average of under 18.

He has been the stand-out bowler for Durham, getting good support from Chris Rushworth who has taken more than 50 wickets this season himself.

Sussex's Steve Magoffin and Middlesex's Tim Murtagh have also taken a decent haul of wickets but Onions has done it in a winning team - generally making early inroads in to the opposition's batting order and helping his side get into a position to boss matches.

He can count himself unlucky not to be in the England squad for this winter's Ashes and he is one player in the county set-up that most other teams like to have in their side.

Young player of the Year

I'm going for Gary Ballance here. The Yorkshire batsman has scored four hundreds and six fifties this season, including 148 against Surrey in the last round of matches.

What I like about him is that he scores big hundreds and influences matches. I'd heard a lot about him and his potential and it's great news for Yorkshire that he will only get better, along with England who have just selected him in their Ashes squad for the winter.

Another young player to impress me this season is Middlesex batsman Sam Robson and he is is very much on the radar of the England selectors.

There's plenty of talent coming through the ranks at counties up and down the country at the moment, with Yorkshire opener Alex Lees, Warwickshire's batsman Laurie Evans and Scott Borthwick all having promising seasons.

Durham's Borthwick has reinvented himself as a number three this season and should be proud of his efforts in scoring more than 1,000 runs while playing half his games on some bowler-friendly surfaces up in the north east.

I've been impressed with Wayne Madsen's captaincy and batting at Derbyshire this season, in what has been a difficult season for the club. His side might end up being relegated but Madsen has led from the front and impressed many observers.

Disappointment of the season

From a personal perspective, Surrey have won this tag. We did reach the final of the FLt20 but we have also suffered relegation to Division Two.

League tables don't lie and over the course of the season the team's performances have not been good enough.

The club announced some big signings for the summer and, though it was unfortunate that Graeme Smith had to go home after three matches because of injury, the Brown Caps should not have resulted in relegation. Both Ricky Ponting and Hashim Amla added a lot both on and off the field but the overall performance of the team over the summer was well short of expectations.

There were no real surprises in England's Ashes squad for the winter, with 15 of the players I selected in this column last week all making the plane.

The only exceptions were Tim Bresnan, who is injured, and Nick Compton, with Gary Ballance and Michael Carberry in the actual squad instead.

I'm confident that it's a strong England squad and I fully expect Alastair Cook to return home from the winter tour still in possession of the urn.

They just need to make sure they get off to a good start in the first Test at Brisbane. If they don't, then it might be a closer series than what we witnessed this summer.