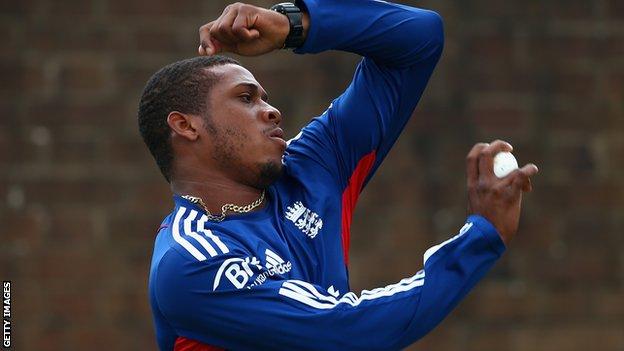 Sussex bowler Chris Jordan has admitted he did not expect to be picked for the England Performance Programme squad.

The 24-year-old paceman will travel to Australia with the squad this winter.

"I haven't been thinking about squads and internationals. I have mainly concentrated on doing well for Sussex.

"If international honours come on the back of that, then I am more than happy. I am just grateful I am on a plane to Australia one form or another," Jordan told BBC Sussex.

"We go to Brisbane for two weeks and then Perth for two weeks. It will be a lot of training, whether physical, mental or skills-wise. I hope for my game to progress in those weeks and see where we are after Christmas."

Barbados-born Jordan has been a revelation since moving to Sussex on a two-year deal following his release by Surrey at the end of last season.

He has taken 56 County Championship wickets at an average of 26.51 this year and was given his first international call-up when he was included in the England squad for the recent one-day series against Australia.

However, he only featured in the final match, taking 3-51 in a 49-run defeat at Southampton.

"Being new to the squad you have to bide your time," he said.

"There are obviously a few guys ahead of me in the pecking order. I tried to stick at my training and train hard so that if I did get my opportunity I was ready. I had to keep my intensity up all the way through that series.

"Southampton was good fun and nice to get my debut for England. Hopefully, there is a lot more to come."

Jordan is grateful to Sussex cricket manager Mark Robinson and coach Mark Davis for their help in kick-starting his career after a frustrating time at The Oval.

"From the time I arrived Robbo, Davo and all the background staff have been brilliant to me," he added.

"They have helped me settle and get on with on-field issues. I am very grateful for them and hopefully long may it continue."