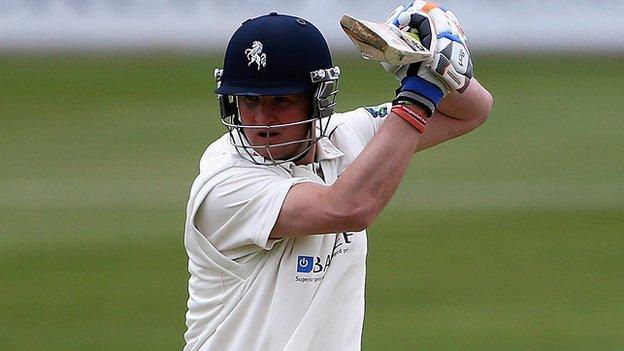 Former England batsman Rob Key hit his second County Championship century (and his fifth ton of 2013) to keep Kent in the game against Division Two champions Lancashire at Canterbury.

That was just 24 shy of the visitors' 284, having added just 15 to their overnight 269-8, Ashwell Prince failing to supplement his overnight 134.

Lancashire then reached the close on 75-0 second time around, a lead of 99.

Paul Horton (36) and Luis Reece (33) remained unparted at the close to give already promoted Lancashire the edge as they chase a ninth County Championship win of the summer.

Earlier, Key's only support had come from Ben Harmison, who hit 59 in a fourth-wicket stand of 158, having come together on a perilous 7-3.

But, once they were parted, the wickets began to clatter again, only two more batsmen making double figures.