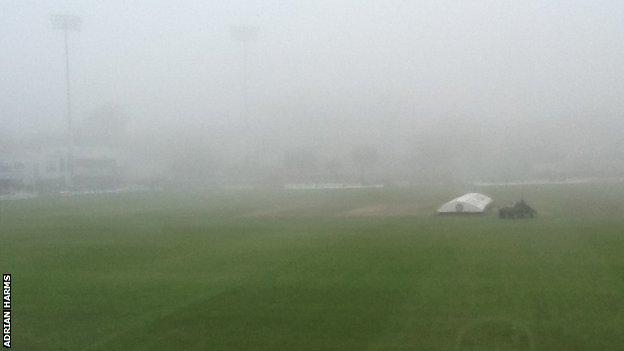 Wicketkeeper Ben Brown's half century helped Sussex build a sizeable lead over county champions Durham on a day interrupted by fog at Hove.

Brown (64) and Luke Wright (87) shared a century partnership before Ashar Zaidi contributed with 45.

The hosts were eventually dismissed for 328, exactly double their opponents' first-innings total of 164.

Durham were 2-0 in reply before, after several inspections, poor visibility saw play abandoned at 17:00 BST.

Despite just 36.2 overs possible in the day, Sussex were able to recover from 90-5 to leave Paul Collingwood's side in danger of ending a successful season, that has seen them secure 10 first-class wins, with a defeat.

England one-day international Wright added just 13 to his overnight score before being dismissed, and at that point Sussex were only a modest 39 ahead.

But Brown and Zaidi, who is playing in only his second first-class match, dug in with a stand of 83 in 20 overs.

Durham seamer Graham Onions, who this week found out he had missed out on an England Ashes squad place, dismissed Steve Magoffin to end the innings with 3-103.

A second stoppage for fog brought an end to play with Durham 162 behind.