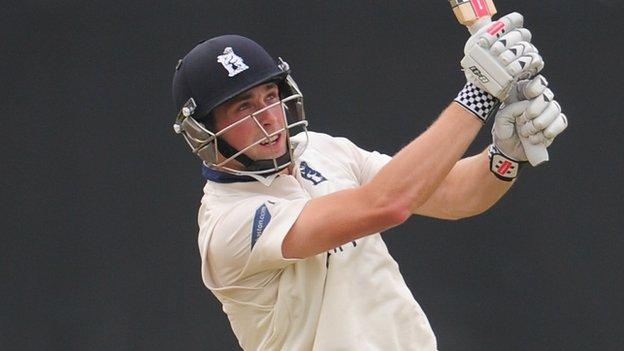 Derbyshire are on the verge of dropping back to Division Two after being outplayed for the second day running by 2012 county champions Warwickshire.

Chris Woakes completed a career-best 152 not out, sharing a record ninth-wicket stand for the ground of 166 with Maurice Chambers, who hit his maiden fifty, as the Bears declared on 391-9.

The hosts then buckled in reply, being reduced to 44-5 before an early close.

On-loan fast bowler Chambers staked a claim for a full-time Warwickshire contract after passing his previous highest first-class score of 30, for Essex against Leicestershire two summers ago, having arrived at the crease with a first-class batting average of just 5.57.

After resuming on 285-8, with rain having washed out the morning session, Chambers and Woakes went on to add a further 98 runs under the floodlights, ensuring a third batting point to help the Bears' bid to earn a more lucrative top-three finish.

Chambers was finally stumped after giving spinner David Wainwright the charge, having shared in a stand that, although well short of the county best of 233, set by Jonathan Trott and Jeetan Patel against Yorkshire at Edgbaston in 2009, was still the best by any ninth-wicket pair on the County Ground at Derby, eclipsing a 78-year-old record.

Woakes' effort surpassed his own previous career-best 136, set against Hampshire at Edgbaston in 2010.

Having been denied a third bowling point, Derbyshire, needing to win to stay up, were soon in desperate trouble.

Ben Slater was lbw to the third ball of the innings, skipper Wayne Madsen edged Chambers to first slip and Paul Borrington was taken at gully to leave the home side reeling at 9-3.

Chambers then had former Warwickshire wicketkeeper Richard Johnson caught by ex-Derbyshire skipper Rikki Clarke at second slip before Alex Hughes was caught behind off Barker.

Still needing another 198 to avoid the follow-on, with two days left, Derbyshire's only hopes of survival now appear to rest with Shivnarine Chanderpaul.