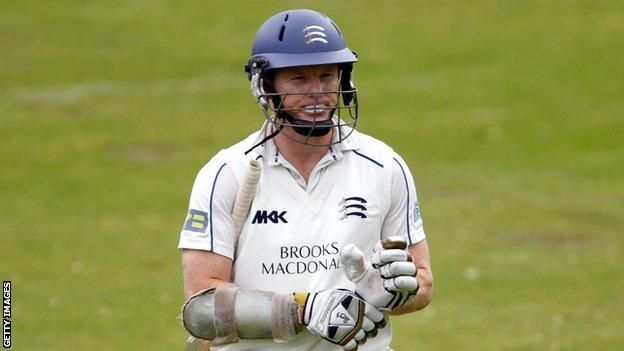 They earned 32 County Championship batting bonus points this summer - the fewest of any team in the top half of the Division One table.

He told BBC London 94.9: "That is where we have let ourselves down. The bowlers have done a fantastic job, but as a batting group we've been disappointing.

"Particularly when your openers both get 1,000 runs you hope your middle order jumps on the back of that."

Openers Chris Rogers and Sam Robson were the only Middlesex players who played more than four County Championship games to average above 35 in 2013.

The 36-year-old Australian, who scored 1,068 Championship runs at an average of 56.21 despite spending a large part of the summer involved in the Ashes series, called on his teammates to show more application at the crease.

"Talent doesn't mean a lot at times. It still comes down to decision making, being tough enough and all those other qualities.

"They have got to want it and they need to go out and perform," he said.

"You cannot expect to get a score now and again. You need to make it happen when you go out to bat."

Having completed their fixtures with defeat by Yorkshire last week, Middlesex sat third in the table prior to the final round of games.

Asked if the club had improved following a third-placed finish in 2012, Rogers replied: "Not necessarily.

"We have played some decent cricket but, for me, we are still making similar mistakes to what we made when I first got here. That was three years ago.

"Those are the problems we need to address and the management has been speaking about it. We have got six months to think about those things."

After returning to the Australia Test side following a five-and-a-half year absence Rogers was an ever-present for the tourists in the Ashes series this summer, averaging 40.77.

On Monday, England named their touring party for the return series this winter and Rogers is backing his side to turn the tables.

"Australia made some good improvements as a side and we feel like England are there to be beaten," he said.

"We have to perform. Playing in Australia in front of the big crowds will be amazing."