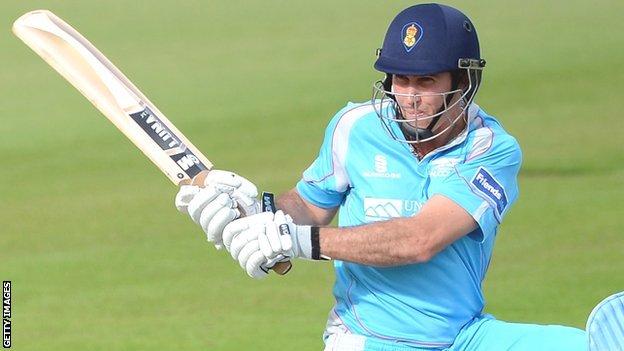 Derbyshire captain Michael Madsen says they are full of optimism for this week's win-or-bust Division One County Championship game against Warwickshire.

Derbyshire must win and hope other results go their way if they are to avoid relegation to Division Two.

How Derbyshire can survive?

If Nottinghamshire beat Somerset, Derbyshire need to beat Warwickshire and claim the same or more bonus points than Somerset.

If Somerset beat Nottinghamshire, Derbyshire need to beat Warwickshire and claim the same or one less bonus point than Notts.

If Somerset and Nottinghamshire draw, Derbyshire need to win and pick up three more bonus points than Somerset and four more than Notts.

Nottinghamshire and Somerset face each other and all three results could see Derbyshire go down, even if they win.

But Madsen told BBC Radio Derby: "If you asked two months ago we would have bitten your hand off for this chance."

Three wins in fours games have given Derbyshire a fighting chance.

Madsen added: "We were not in a great position and knew it would be difficult. We said three wins would probably keep us up but now we need a fourth."

He said the challenge the club faced at the beginning of the year means staying up would be a bigger achievement than winning the Division Two title last year.

Madsen added: "We are one of the smaller clubs - ground, facilities and budget-wise. But we have such a special spirit and community around the club and if we can achieve top flight again for next season it would be fantastic."