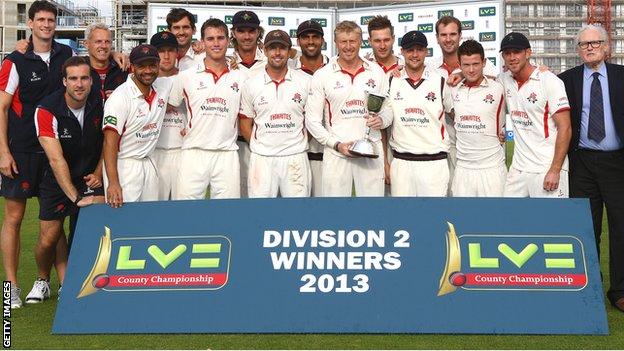 Lancashire won the Division Two title as a draw with Gloucestershire proved enough to secure the silverware.

Northants could only draw with Kent and so Lancashire, who were promoted last week, could not be caught at the top.

Luis Reece made 97 in Lancashire's second innings and his dismissal saw the visitors declare on 195-2.

Reece was bowled by David Payne three short of a maiden first-class century after hitting a six and nine fours.

The two captains shook hands on a draw and moments later news filtered through that Northants and Kent had also settled on a draw - a result which meant Lancashire were champions.

Having won the Division One title in 2011, last season's relegation came as a bitter disappointment for the Red Rose county.

They have, however, been an irresistible force this summer, beating closest rivals Northants home and away and famously bowling out Essex for 20 to win by an innings and 105 runs at Chelmsford.

Skipper Glen Chapple, new ball partner Kyle Hogg and spinner Simon Kerrigan have each contributed over 50 wickets, while the batting line-up, headed by Australian Simon Katich, who returned home before the Gloucestershire game, have all made vital contributions at times.

"It's not an easy thing to do, there are some good teams [in this division]. We've developed as a squad, new players have come in and done really well, and the achievement is a big one, regardless of it being Division Two," said Chapple.

"We've played some good cricket this year and we've had to. We're pleased with that, and hopefully it will stand us in good stead for the future."

Lancashire are the only unbeaten side in the two divisions of the Championship and will look to maintain that record in their final game of the season against Kent at Canterbury next week.

"Although the day belonged to the champions, Michael Klinger could see a lot of positives in this performance in his last game of the season.

"He flies back to Australia on Saturday but will return to Gloucestershire next season.

"He has been particularly impressed by the way the lower order have improved over the season.

"The last-wicket performance of Matt Taylor, who was making his first-class batting debut, and David Payne showed how the bowlers have contributed to the batting line-up.

"Payne and Taylor avoided the follow on and added over 50 to ensure a draw was the only outcome."