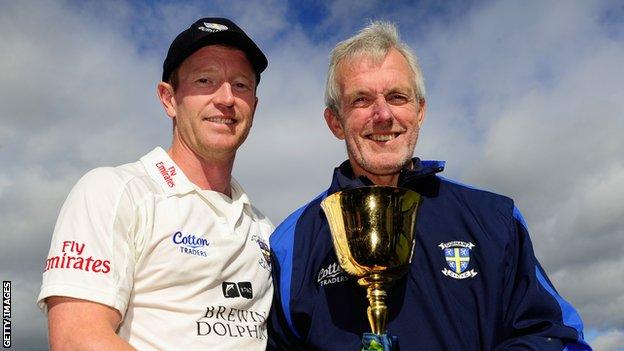 Collingwood, 37, lifted Durham's third title in six years after their eight-wicket win against Nottinghamshire, with fit-again Cook in attendance.

"All the players wanted to do it for Geoff," Collingwood told BBC Sport.

"When you lose someone people have got to put their hand up and everyone around the club did and kept fighting.

"We won the title for a third year in 21, it's a great record for a coach who has been around Durham so long."

Collingwood's return to county cricket after an illustrious England career last term led to his appointment as captain toward the back end of the campaign - and a run of five wins from the last six matches.

That form was continued into the current season, with victory against Notts their fifth in succession and 10th in the championship, and adds club honours to the World Twenty20 title he collected as England skipper in 2010.

"The county season is very gruelling, there's a lot of travel for which you need a lot of fitness."

Following the departure of senior professionals such as Liam Plunkett, Ian Blackwell and Michael Di Venuto last term, Durham were not expected to trouble the title contenders in 2013.

However, a youthful squad, peppered with senior professionals such as Collingwood and Graham Onions, has been potent with bat and ball and sealed the Championship with a game to spare.

The campaign began with the club going cap in hand to the county council for financial help. I don't have enough fingers to count how many national newspaper and website writers wrote them off.

In early August they were easily beaten at Lord's by Middlesex and captain Paul Collingwood had to issue a 'don't panic' warning.

The team pressed on and, with the dressing room galvanised, Durham have been simply breathtaking over the last five weeks.

They have now won a club-record five games in a row and could become the first side to win 11 in a season since the two-division split in 2000.

You can single out many players for praise, but ultimately it has been a team effort and every one of them deserves to celebrate this one to the full.

"For such a young group of lads to win the Championship it really does put us in good stead for the future.

"A lot of decisions that are made here at the club are made for the next five to 10 years, and for the guys to respond and take responsibility on like they have over the whole season really does put us in good stead."

This season's success is likely to bring an end to the Durham careers of several players from the 2013 squad, with Mitch Claydon already confirmed to leave, and uncertainty regarding the future of Steve Harmison and Will Smith.

"In many ways that's probably the real regret of the season. The financial situation at the club means we have to lose a lot of players and players we don't want to lose, players who have put their hands up at the right times and put in big performances for us," Collingwood continued.

"They've been absolutely magnificent for this club and they've been driven by their own personal pride in many ways.

"I do take my hats off to the guys who keep fighting for Durham and knowing that its probably going to be their last year for them.

"We've still got a strong core of good young players that are going to drive us on for the next 10 years.

"As long as we keep hold of them and as long as they have the ambition, which I am sure they will, this club will be safe and well."