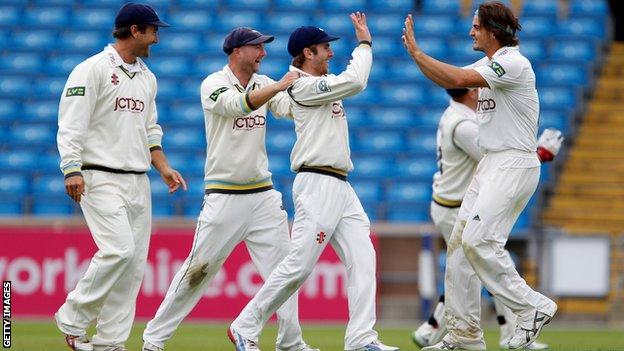 Yorkshire defeated Middlesex by 80 runs to secure second place in their first season back in Division One.

Sam Robson and Joe Denly fell early but Chris Rogers (65) and Dawid Malan led Middlesex to a strong position at 90-2.

When they departed either side of Neil Dexter falling to Jack Brooks (4-33), a brief wag of the tail ensued before the seamer claimed the final three wickets.

Last season, the Tykes had to settle for the runners-up spot in Division Two by virtue of Derbyshire's higher number of wins - the sides finished level on points.

Adil Rashid had made the early running for Yorkshire, hitting four boundaries before he was caught by Malan at slip off the bowling of Tim Murtagh.

Having survived an early drop on day three, Ballance resumed on 53 not out and continued to bat beautifully until he was ninth man out when he heaved Tom Helm to long-off, just 10 runs short of reaching 1,000 Championship runs for the season.

Brooks was last man out five balls later and Middlesex formed a guard-of-honour as they left the field for opening fast bowler Corey Collymore, who is out of contract with the county at the end of the summer.

As they chased for victory, Middlesex lost Robson just before lunch and Denly three overs after, before Rogers moved confidently on to 28.

Robson was then given a lifeline when he edged Ryan Sidebottom to wicketkeeper Jonny Bairstow but umpire Nigel Llong signalled a no-ball.

After the departures of Malan and Dexter, Rogers again survived but this time Adam Lyth could not cling on at slip off the bowling of Plunkett.

Four runs later he was gone to the same bowler and Middlesex's slim chances of victory looked over.

The tail dragged them to 185-7 but Helm departed lbw to Brooks and two balls later Tim Murtagh edged to slip, before the match ended when Ollie Rayner drove the paceman straight to mid-off to secure the Tykes as Division One runners-up.

"You always want to have nice batting tracks but Yorkshire desperately wanted to win that game and their bowling attack is good so there was no surprise when we turned up and saw that wicket.

"They probably outclassed us. To be fair, they played the better cricket and we didn't have the answers. We haven't had the answers in the two games we played against them.

"I think they're a very good side and are unlucky not to win [the County Championship] in many respects, so bad luck to them."