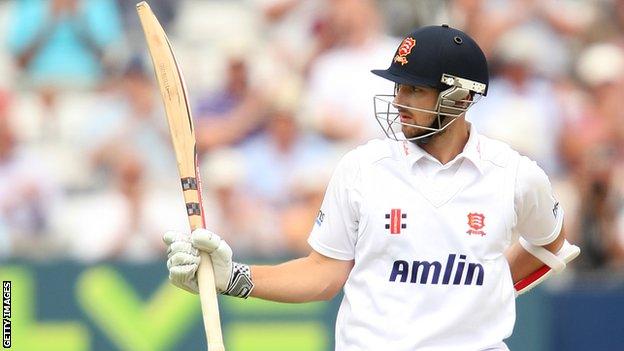 Jaik Mickleburgh led promotion-chasing Essex's charge against Glamorgan before rain curtailed play and left the match heading for a draw.

Resuming day three on 107-1, the hosts saw Greg Smith fall for just 16, caught at gully off Michael Hogan early on.

But Mickleburgh (124 not out) scored his second first-class ton of the summer and put on 108 with Owais Shah (59 not out).

However, rain meant there was no play after lunch with Essex on 240-2.

The home side will still have one eye on Northants' game against Kent, which also looks destined to end in a draw.

Essex started this round of games 21 points behind second-placed Northants and now may have to rely on a dramatic change in circumstances to achieve promotion.

If both matches do end in a draw, it means that Essex will go into next week's final round of fixtures needing a resounding win against Hampshire and a heavy Northants defeat at Worcester to have any chance of being promoted.