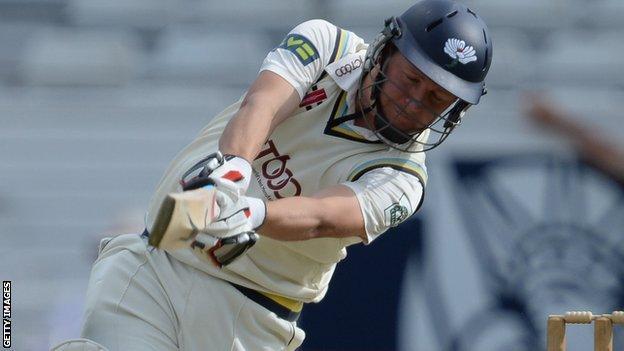 Yorkshire built a 212-run lead over Middlesex, but saw their Championship challenge end as Durham beat Notts to win the title.

Phil Jacques (21) and Jonny Bairstow soon followed, before Gary Ballance (53 not out) gave the crowd some cheer by hitting a 47-ball half-century.

Andrew Gale made 40 before bad light ended play with Yorkshire on 130-5.

It closed a day on which Yorkshire's hopes of ending their 11-year wait for silverware disappeared.

Their last triumph came in the 2002 Cheltenham & Gloucester Trophy final after they won County Championship the previous season.

Play had not even started at Headingley when Durham were celebrating at Chester-le-Street.

When the sides finally got under way, Lyth was trapped lbw by Collymore for a duck with the fourth delivery of the day - the same score and dismissal as the first innings.

Williamson joined Lyth in the pavilion moments later when Tim Murtagh (2-51) had him clean bowled and once the seamer had Jacques caught at slip, Collymore took Bairstow's off stump.

The Tykes could be forgiven for batting without focus after their title ambitions ended but Ballance batted beautifully, racing to 50 courtesy of seven boundaries. However he was given a lifeline when on 12, Ollie Rayner dropping him at second slip off Murtagh.

His skipper Gale had given some able support before Tom Helm struck him plum in front just four minutes prior to the day's premature end.

"Yorkshire should have enough runs on the board to win the match given how much the conditions have assisted the bowlers so far.

"The sun is set to shine for most of the final day but it's hard to see the amount of movement from the ball giving Middlesex's batsmen a great deal of hope.

"The hosts are likely to bat on in the morning, although there must be some temptation to make the most of the 10:30 start and any additional swing that may bring."